The latest market highlights and our views on the key developments as markets strike a risk-averse tone on ongoing coronavirus concerns; the eurozone still has a long way to go on the road to recovery; and February kicks off with the usual round of PMI surveys

Markets ended the month of January striking a risk-averse tone on Friday, with concerns over the ongoing coronavirus outbreak seeing risk appetite battered across the board.

This did, however, come as something of a surprise, bearing in mind that there was little in the way of fresh information relating to the outbreak on Friday.

China has now confirmed, at the time of writing, around 14,000 cases of the virus, while a handful of other instances have been reported across the globe; including the first two infections here in the UK. This, alone, however is unlikely to have been the catalyst for Friday's shift in sentiment.

Instead, it is more likely that the risk-off shift came as a result of investors wanting to take risk-off the table before the weekend, and crucially wanting to remove risk before the scheduled re-opening of Chinese markets (for the first time since the outbreak began) on Monday.

This risk-aversion was most evident in the bond market. Looking specifically at Treasuries, US 10-year bonds tumbled by a further 5bps on Friday, falling to 1.50%, and on track for a roughly 40bps fall this month. This signifies strong demand for bonds, with yields moving inversely to price.

The strong rally in the 10-year resulted in part of the US yield curve inverting once again, with the 3-month 10-year spread now negative, a historically strong indicator of a recession in the coming 12-18 months.

The aggressive bond rally saw equities fall. In Europe, the pan-continental Stoxx 600 declined by 1.1%, while London's FTSE 100 shed 1.3%. Across the pond, the US benchmark S&P 500 tumbled 1.8%, its worst 1-day performance since October.

Oil prices also tumbled, with both Brent and WTI falling to a 4th straight week of losses as concerns over Chinese demand escalated.

Of course, the risk aversion in other asset classes resulted in strong demand for the typical FX safe-havens of the Japanese yen and the Swiss franc.

The yen ended the day around 0.5% higher, trading at its best levels in 3 weeks having chalked up its biggest 1-day gain since late-October. The franc, meanwhile, gained 0.7% against both the dollar and euro, though the appreciation heightens the chances of the SNB restarting their FX interventions.

Meanwhile, the dollar, which typically performs well as a safe-haven asset, struggled as the week drew to a close, largely as a result of month-end rebalancing, with notable weakness into the 4pm London fixing. The greenback ended the day with losses of 0.5% against a basket of peers, with the DXY falling to a 2-week low.

Both antipodeans also lost ground, with the Aussie and Kiwi shedding 0.4% apiece, the typical reaction seen when markets strike a risk averse tone. 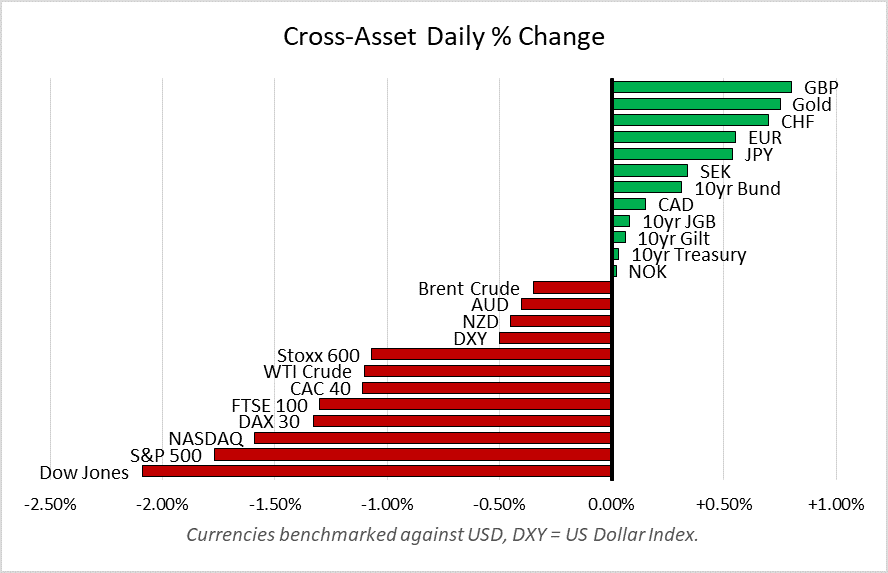 Looking ahead, the coronavirus outbreak will remain the primary driver of risk appetite. However, with no sign of the outbreak coming under control, it remains highly likely that the number of cases continues to increase over the coming days.

Eurozone - A Long Road to Recovery

Turning to Friday's data, and it is clear that the eurozone's recovery still has a long way left to go.

The first estimate of fourth quarter GDP pointed to the bloc expanding at the slowest pace since late-2013 on Friday, growing at just 1.0% on a year-on-year basis. 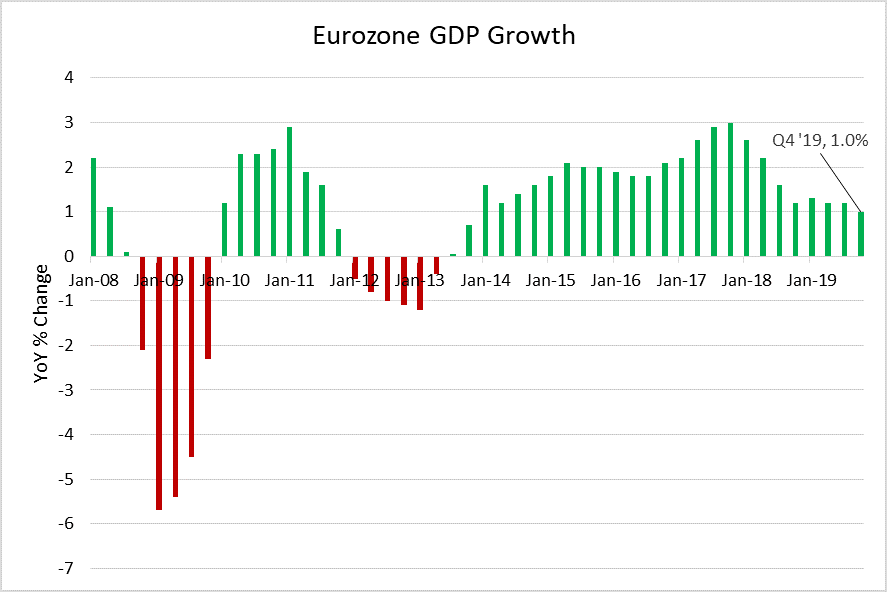 The pace of expansion was similarly unimpressive on a quarter-on-quarter basis, with expansion of just 0.1% recorded, the slowest pace since the beginning of 2013.

While growth was dragged lower by both France and Italy, the GDP report does cast some doubt on the ECB's recent assessment that the eurozone economy is 'stabilising'. Of course, it is important to remember here that GDP is a lagging indicator, and that recent sentiment surveys have shown some modest signs of improvement.

Moreover, the ongoing benign pace of inflation will also be a concern to ECB policymakers. January's flash CPI report pointed to headline inflation increasing by 1.4% YoY, the fastest pace since April.

However, the more closely watched core inflation measure - which strips out food and energy prices to provide a more accurate gauge of price pressures - pulled back in January, increasing at 1.1% YoY, a 3-month low. 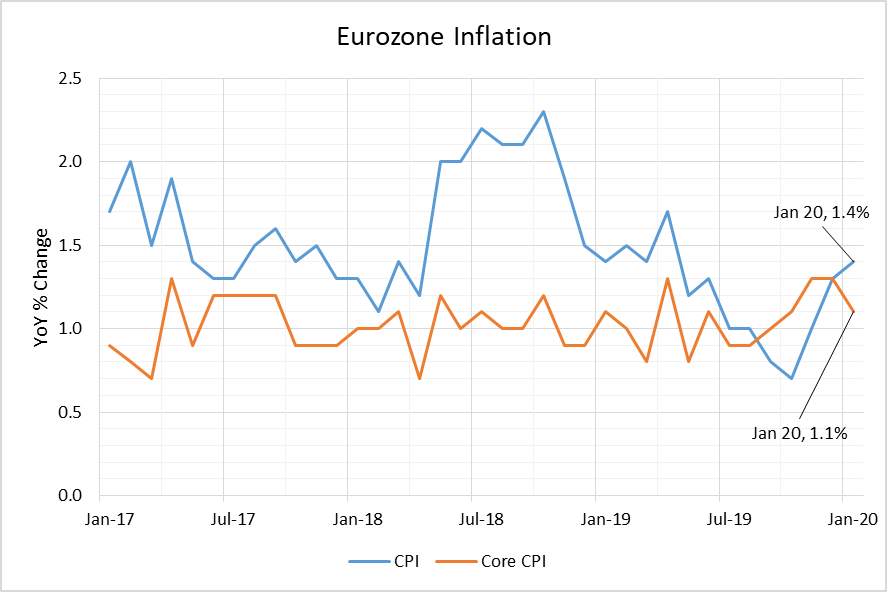 As a result of the lacklustre pace of growth and the ongoing subdued inflation, there remains no end in sight to the ECB's ultra-loose policy stance; however policymakers continue to require significant assistance from looser fiscal policies which hold the key to the revitalisation of the bloc's economy.

Across the pond, Friday saw a number of notable economic releases, including;

A fresh trading week - and a new month - gets underway today with the usual round of manufacturing PMI surveys in focus.

In the eurozone, final data for January is expected to provide further signs that the ongoing industry slowdown may be bottoming out, with the index set to have chalked up a second straight monthly increase, reading 47.8 - unchanged from the flash estimate. 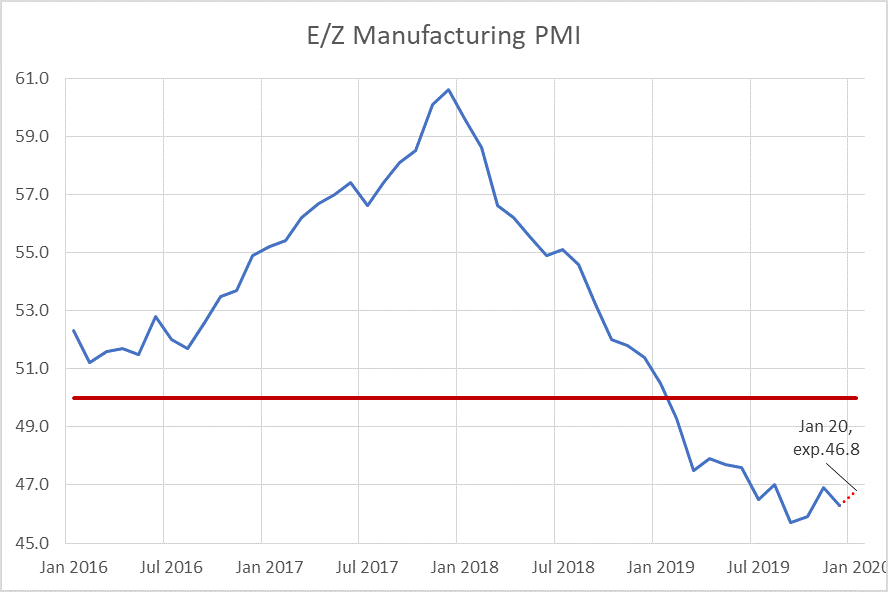 Meanwhile, in the UK, January's final data is set to provide confirmation of the post-election 'Boris bounce' in the UK economy, with a reading of 49.8 expected, also expected unchanged from the flash estimate. While this would still point to the sector remaining in contraction, such a level would represent a 9-month high. 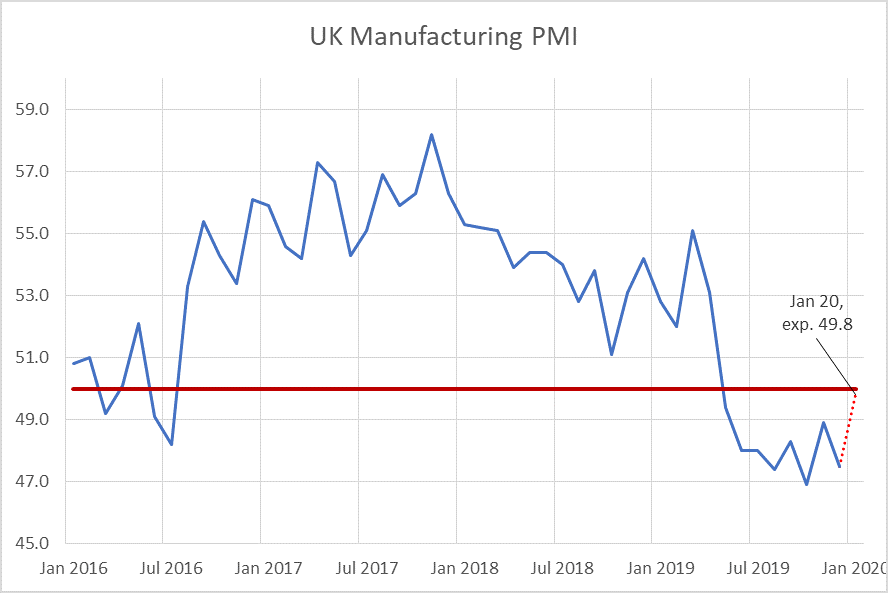 Across the pond, the ISM's manufacturing gauge is set to have recovered from its lowest levels since 2009, with a reading of 48.5 expected. Leading indicators heading into the ISM number are somewhat mixed, with Chicago's regional PMI survey - mentioned above - hitting its lowest level in four years; while a host of regional Fed manufacturing surveys have recently beaten expectations. 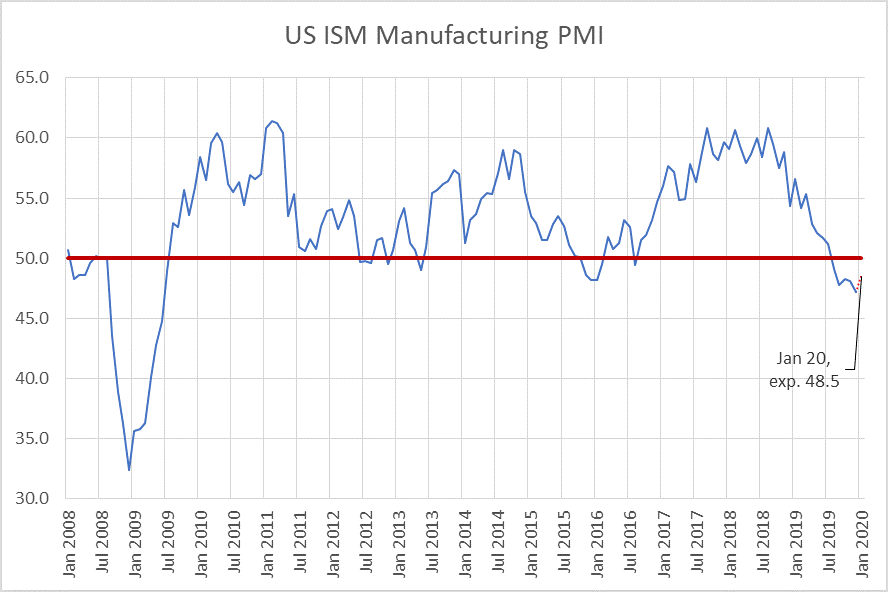 After the UK left the EU at 11pm on Friday, PM Boris Johnson is set to use a speech today to lay out the UK's negotiating stance in the upcoming trade talks.

Johnson is set to strike a bullish tone, with the government recently hardening their rhetoric on the prospect of post-Brexit UK-EU alignment.

Today's speech will likely see Johnson outline his plans for a 'Canada-style' comprehensive free trade agreement, while stating that if that is not possible, the UK will pursue an 'Australia-style' limited deal instead. Such an arrangement is akin to a no-deal exit, an indication that the government is willing to walk away from talks and revert to WTO rules and tariffs.

Also today, EU Chief Negotiator Michel Barnier is set to publish a draft of the EU's negotiating position for talks on the future relationship. Close attention will be paid to how the two positions match up.

However, a note of caution, the next couple of months is set to see a significant degree of posturing from both sides as they set out their negotiating stances. As talks get to their crunch period in early spring, these positions will likely have to be watered down - on both sides - in order for a deal to be agreed.

US Politics in Focus

Meanwhile, in the US, politics will also be in focus this week.

Firstly, this evening, the process for selecting the 2020 Democrat nominee - who will face President Trump in November's election - gets underway with the Iowa Caucuses.

There are still 11 major active candidates campaigning for the nomination, therefore, if the old saying 'there's only three tickets out of Iowa' rings true, the field could significantly narrow over the coming days. 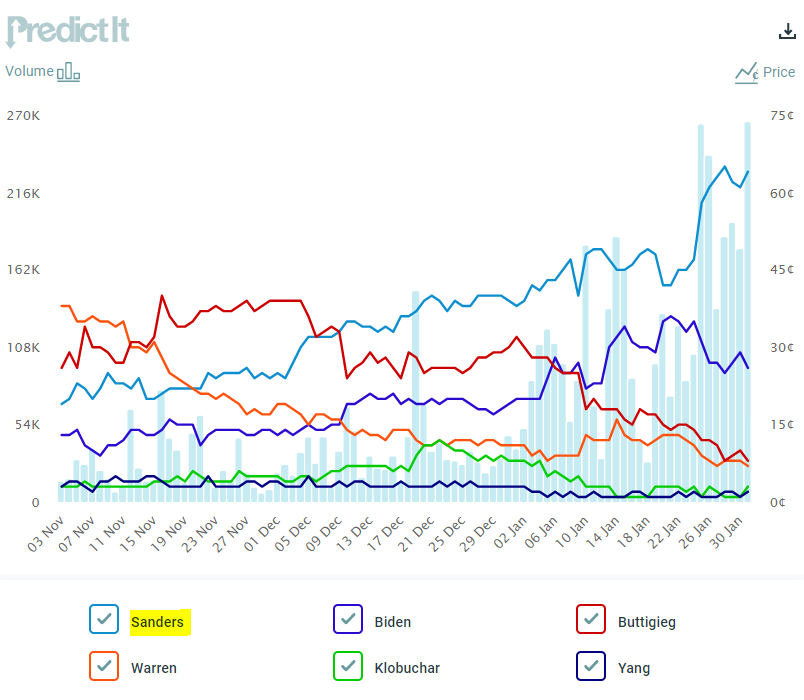 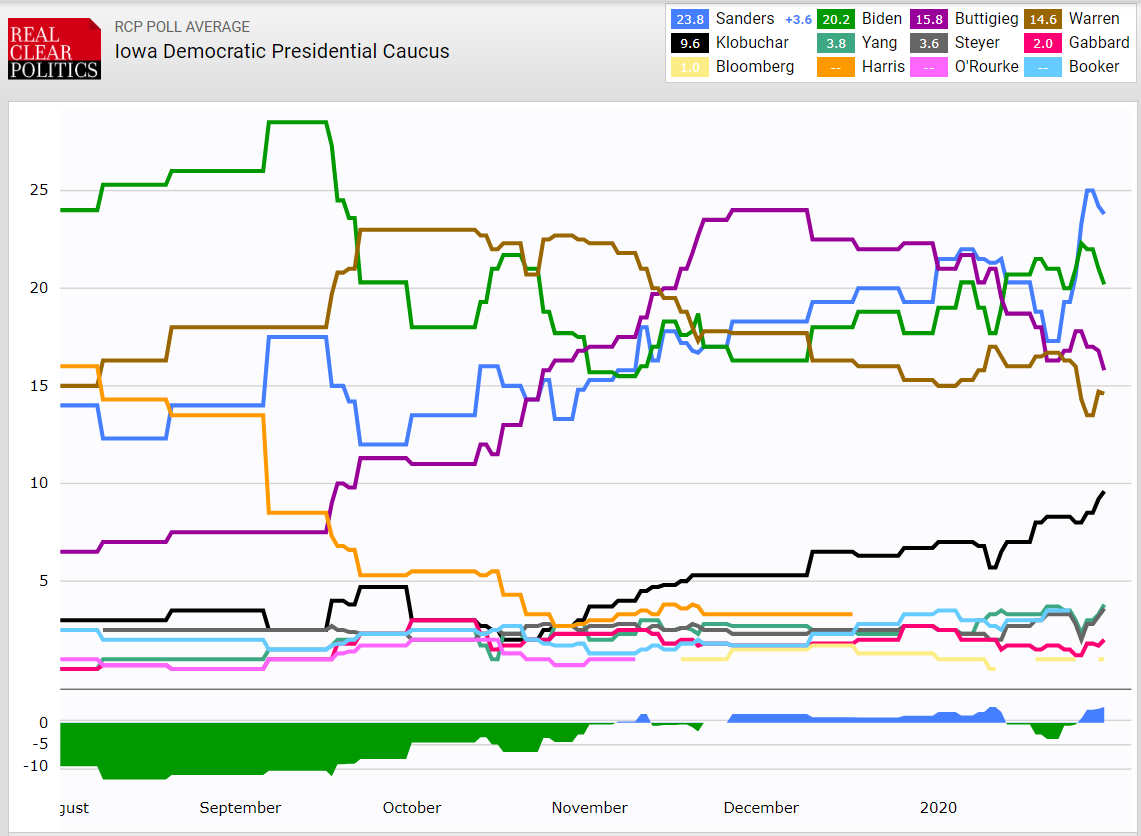 Meanwhile, on Tuesday, President Trump is set to deliver his State of the Union Address to a joint session of Congress. Trump's remarks are likely to be used to kick-start his re-election bid.

Finally, on Wednesday, the impeachment trial of President Trump is set to conclude with an acquittal vote in the Senate after the Democrat's motion to subpoena witnesses was defeated last week.

Looking ahead, monetary policy will remain in focus over the course of the coming week.

In terms of policy decisions, this week sees the first Reserve Bank of Australia (RBA) decision of the year, with rates set to remain unchanged at 0.75%. However, given the ongoing downside risks to the Australian economy, policymakers will likely strike a dovish tone, with markets continuing to fully price in a rate cut before the end of the year.

Markets will also pay close attention this week to remarks from ECB President Lagarde, who is set to make three speeches, with particular focus on any hints at the ECB's ongoing strategy review.

The Week Ahead - Macro

On the data front, this week is all about labour market reports, with jobs data due from the US, Canada and New Zealand. Of course, the US labour market report will be the biggest market-mover, with markets expecting a solid payrolls gain of around 160,000 last month.

Elsewhere, the monthly PMI surveys continue with reports for the services sector on Wednesday, while attention will also fall on the latest US factory orders figures (Tues) as well as the EU Commissions latest growth forecasts, due on Thursday.