The latest market highlights and our views on the key developments as the dollar gains ground on upbeat PMI figures; ongoing Middle East tensions see sentiment remain fragile; US ADP employment figures are in focus today

The dollar gained ground on Tuesday after better than expected PMI figures, however sentiment remained fragile with lingering nerves over tensions in the Middle East.

Both the Japanese yen and Swiss franc struck a softer tone yesterday, shedding around 0.3% apiece, as investors took stock of the situation, and became more hopeful that the escalating tensions would not result in all-out war. This reduction in haven demand was also in evidence in the bond market, where 10-year Treasury yields ended the day 6bps higher.

The aforementioned retaliation occurred overnight, with Iran launching a missile attack on two US airbases in Iraq. The market reaction to the attack was somewhat limited, aided by comments from Iranian ministers that the attack “concluded proportionate measures” and that Tehran isn’t seeking an escalation in tensions.

However, with concerns lingering over the next steps that the Middle East tensions will take, and what course any US response may take, I thought it an opportune moment to take a deeper look at safe havens.

The below chart shows the correlation between the VIX - a gauge measuring volatility in the S&P 500 - and the USD/JPY and USD/CHF exchange rates respectively.

Typically, in times of heightened risk, one finds that the VIX increases, while the JPY and CHF would appreciate against the dollar. Hence, the stronger the negative correlation between the two - i.e. the closer to -1 on the chart - the more desirable a haven can be considered.

What the chart shows is that the yen appears to be the haven of choice at present, holding a much stronger correlation with the VIX than the Swiss franc. Therefore, should geopolitical risk linger and tensions rise, the yen would appear to have more room to appreciate than the franc.

Meanwhile, another risk proxy - the Aussie dollar - had a torrid time on Tuesday. The Aussie endured its fourth straight daily decline yesterday, shedding more than 1% in its worst one-day performance in almost 9 months.

The Aussie's recent woes have been largely a result of increasing Middle East tensions, however Tuesday's fall was largely technically driven. Against its US counterpart, the Aussie fell through the recent ascending trendline, and below its 200-day moving average (yellow line on the below chart) - both key support levels. As such, and with sentiment remaining fragile, further downside can be expected in the coming days. 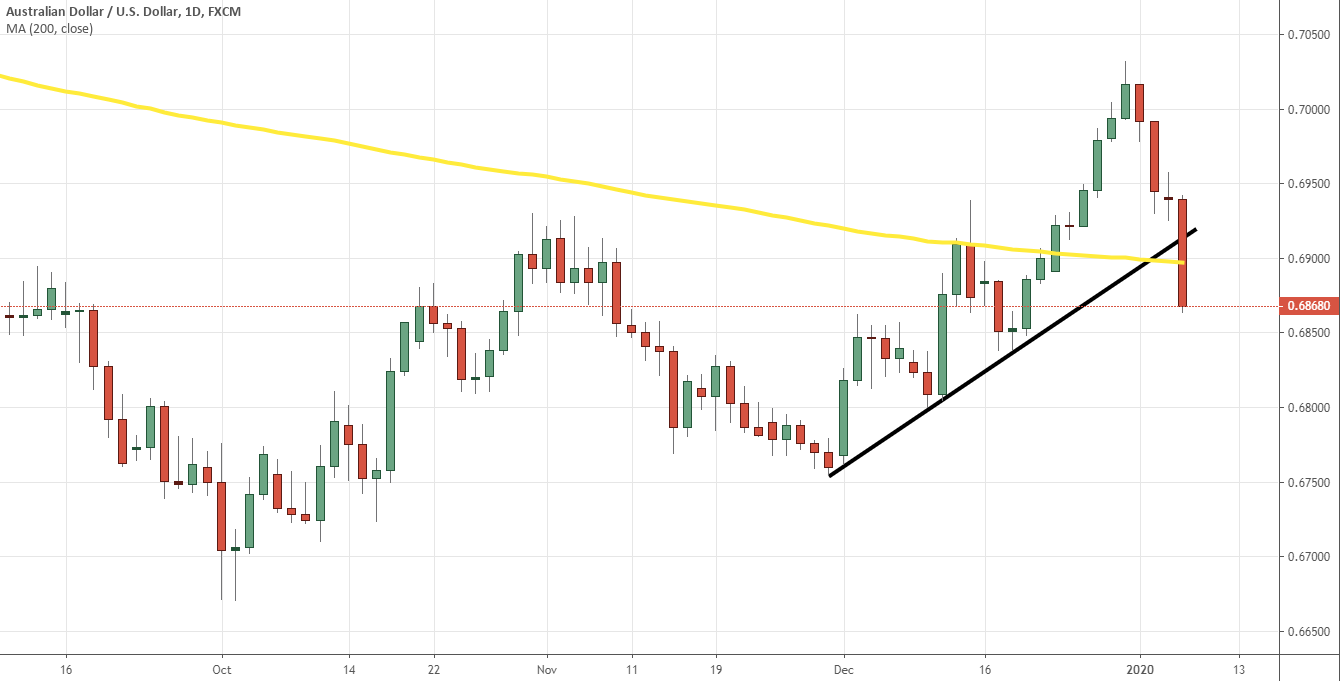 Turning to the macro, Tuesday's data highlight came from the US in the form of December's ISM non-manufacturing PMI report.

The data surprised to the upside, with the index ticking up to a 4-month high of 55.0 last month, representing a strong pace of expansion in the sector. Furthermore - and a significant reason behind the dollar's strength - the data shows that the manufacturing slowdown, which deepened to its worst level since 2009 in December, has not spilled-over into other areas of the economy. 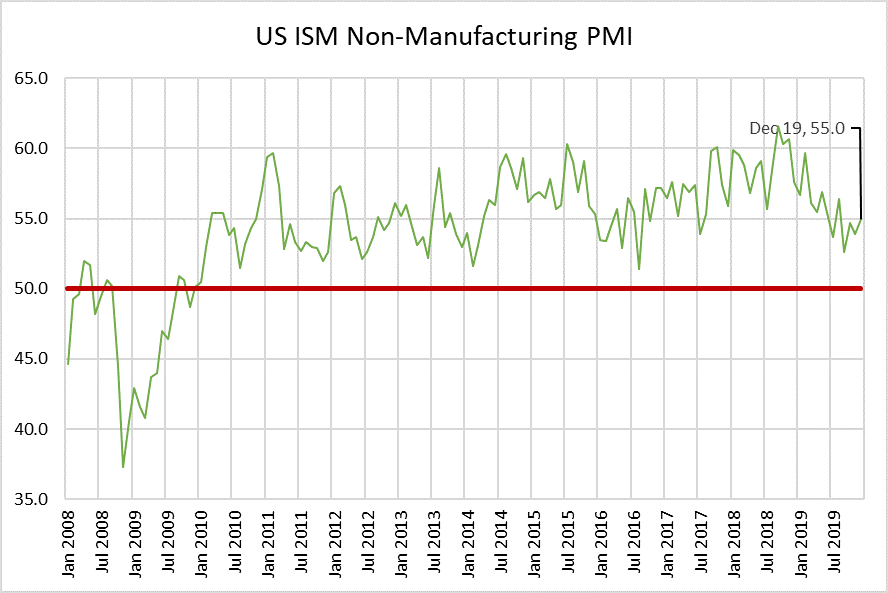 While some of the details of the report were a little mixed - new orders, for example, declining by 3 index points - all sub-sections of the index remain in positive territory, pointing to the strong pace of expansion being likely to continue in the coming months.

For markets, the survey allayed concerns over a potential deeper US economic slowdown, boosting the dollar. Against a basket of peers, the greenback ended the day 0.4% higher, closing in on its best levels in a fortnight.

Yesterday's other notable release came from the eurozone, where December's inflation report showed the pace of price increases beginning to increase. 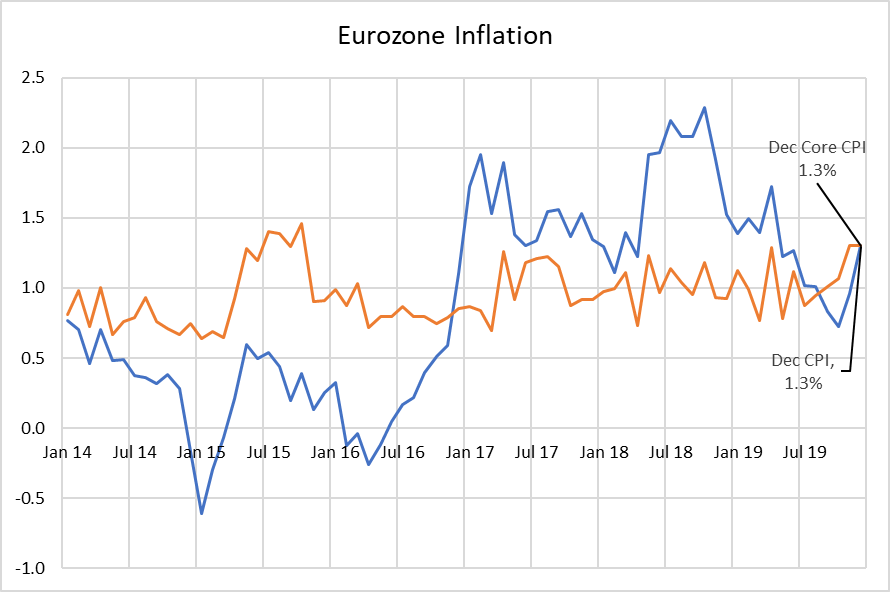 However, it is still far-fetched to imagine inflation continuing to press significantly higher in the coming months, with the recent jump being driven largely by a transitory increase in energy prices. There remain few inflationary pressures in the eurozone economy, particularly due to a continued subdued pace of earnings growth. As such, while the uptick in CPI will be welcome at the ECB, policymakers still have significant work to do in order to reach their 2% price target.

For the euro, the CPI release had little impact, with the data being exactly in line with expectations. The common currency ended the day 0.5% lower, falling victim to the dollar's advance.

After Tuesday's busy calendar, the data takes a bit of a breather today. However, market participants will have plenty to keep them busy, particularly when it comes to the ongoing situation in the Middle East.

Expectations are for the survey to point to the US economy adding 160,000 jobs last month - however the correlation with Friday's official jobs report is dubious at best. 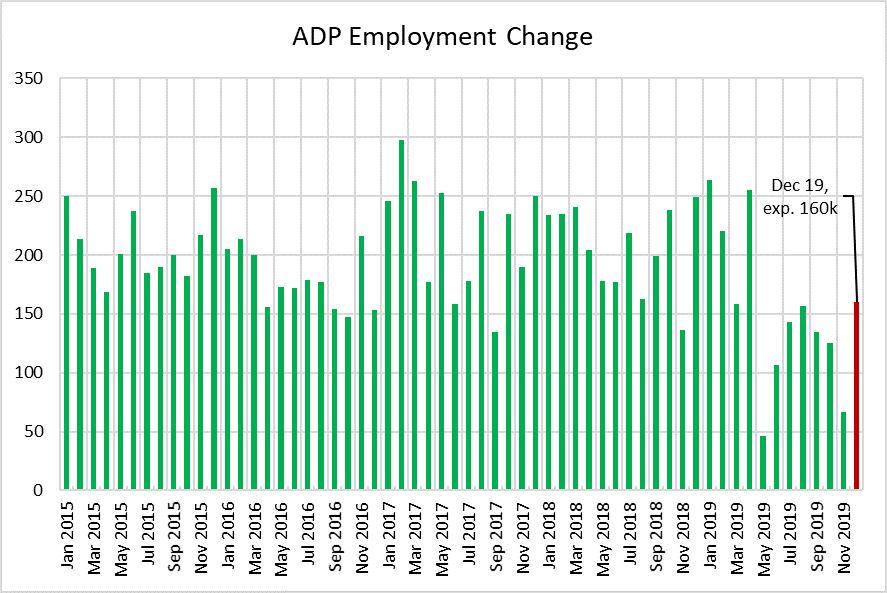 Nonetheless, a solid print should help to support the dollar, and - along with strong employment component of yesterday's non-manufacturing PMI - will likely increase market expectations for a strong payrolls figure come Friday.

Meanwhile, today's only other notable release comes from the eurozone, in the form of December's economic sentiment surveys.

While typically resulting in little market movement, investors will be keen to see the surveys show further signs of a turnaround in the bloc's economy; particularly after better than expected services and composite PMI figures earlier in the week.

The closely watched business climate indicator is expected to tick up to a 4-month high of -0.16, while consumer confidence is expected to remain at a subdued -8.1.