Disappointing data dents the dollar, the euro gains on signs the manufacturing slowdown has bottomed, sterling is pressured by a narrowing Tory lead, and today sees a quiet data calendar

A fresh trading week, and the final month of 2019, got underway yesterday with another round of trade jitters, a health check on the global manufacturing industry, and some interesting comments from ECB President Christine Lagarde.

Turning first to trade, investors were once again nervous on Monday, with concerns over not just Sino-US relations, but also over President Trump turning his attention to other nations in the ongoing trade war.

On China, Commerce Secretary Wilbur Ross brought the prospect of tariff increases back to the forefront, repeating that the Trump Administration would proceed with the planned 15th December tariff increase if no deal with China had been signed by that date. On the whole, market participants had thought that this increase would be shelved for the time being, at least while 'phase one' negotiations are ongoing, though this appears to no longer be the case.

Jitters over Trump's next trade target also dampened risk appetite - with Treasury yields (which move inversely to price) increasing by around 5bps across the curve. This rotation into safer climbs, and away from the dollar (more below), came after Trump announced - via a tweet, of course - that steel and aluminium tariffs against Brazil and Argentina would be reinstated.

While the move in itself may not have a significant impact on US trade, it emphasises how the entire trade narrative can change within seconds, depending on the next musing from the President's Twitter account. It also leaves markets questioning who the self-proclaimed 'Tariff Man' will target next.

Despite the trade jitters, antipodean FX - which typically struggles when markets strike a risk-averse tone - did anything but. The Kiwi dollar ended the day 1.3% higher, trading at its highest levels against the greenback since August, extending gains after breaking above its 100-day moving average in early trade. The Aussie dollar also gained ground, closing just shy of 1% higher, benefitting from the weaker buck.

As is typical for the first day of the month, the latest manufacturing PMI surveys gave market participants their most up-to-date indication of the health of the production sector. 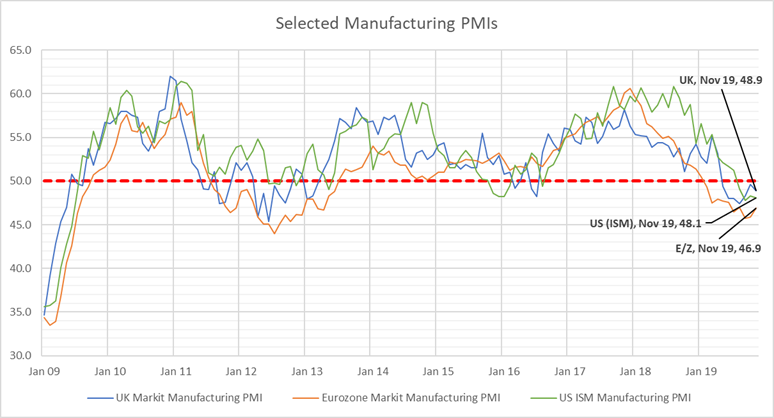 In the eurozone, there are faint signs that the manufacturing slowdown may, finally, be bottoming out, with November's final PMI rising to 46.9 - a three month high. Despite the index remaining below the 50.0 mark, and therefore in contraction, for a 10th straight month, signs that new orders are recovering give some modest cause for optimism looking forward. Furthermore, the manufacturing PMIs for Germany and France, at 44.1 and 51.7 respectively, reached 5 month highs - perhaps indicating that the worst of the manufacturing slowdown may be over for Europe's economic powerhouses.

These glimmers of hope that things may not deteriorate further boosted the euro, which added 0.5% over the course of the day. Yes, that's right, the common currency has finally moved! As the below chart shows, the euro's gain on Monday was the biggest 1-day move in almost 3 months - though this is somewhat indicative of the recent low volatility that has been in evidence. 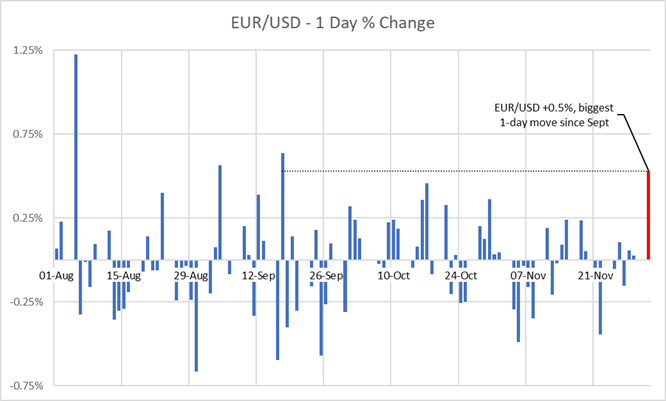 The UK - Under Pressure

Meanwhile, in the UK, things aren't getting any better for manufacturers, with the sector being hit by a double whammy of an ongoing drawdown on pre-Brexit stockpiles, and uncertainties in advance of this month's election combining to dampen activity in the sector. November's final PMI pointed to a 7th consecutive contraction, reading 48.9.

This exerted pressure on the pound, with signs that the Conservative's poll lead may be narrowing - to just 7 points according to the latest ICM/Reuters poll - also posing a headwind to sterling. The pound ended the day unchanged against a weaker dollar, but shed 0.5% against the common currency.

The US - Bleak Picture

Finally, let's turn to the US, where November's ISM manufacturing gauge pointed to a deepening contraction in the production sector. The indicator read 48.1, pointing to a 4th consecutive contraction in the industry, with only supplier deliveries remaining above water, printing 52.0. The concerning aspects of the report, barring the bleak headline print, are new orders - which fell to 47.2 - indicative of further woes ahead, as well as employment, which fell to 46.6 - sparking some concern of a weak payrolls number on Friday.

The ISM figure, and lacklustre leading indicators of the release, came as a big disappointment to markets, who had been hoping that the worst of the US manufacturing slowdown was over; with leading indicators having shown signs of improving, including last week's durable goods report.

Instead, investors are now once again concerned over the health of the US production industry, and apprehensive that things may get worse. This exerted pressure on the dollar, which shed 0.4% against a basket of peers.

Though I'm not one for being overly reliant on the technicals, it is important to note that the greenback's fall saw the dollar index (DXY) break through a number of key levels, including the 50-day moving average and recent ascending trend line, as the below chart shows.

ECB President Lagarde gave her first testimony to the European Parliament, and at first glance gave little in the way of fresh information. Lagarde repeated the ECB's message that growth remains weak, largely due to global factors, as well as re-emphasising policymakers' resoluteness in hitting their 2% inflation mandate.

However, it was on the subject of inflation that Lagarde made some interesting remarks, stating that symmetry of the inflation goal would be a topic in the upcoming ECB strategy review. The idea of a symmetrical inflation target - rather than the present fixed goal - is to target an average level of inflation over the medium-term, and to allow inflation to run hot (i.e above target) to make up for periods when the pace of price increases has undershot the target.

While this may sound complicated, the practical implication of such a policy would be low rates, and potentially ongoing quantitative easing, for longer; with loose policy required to push inflation to, and beyond, the target. In the medium-term, if such a symmetrical target is introduced, this may pose a headwind to the common currency.

Today's economic calendar is much quieter than Monday's, ensuring that attention should remain on both developments in Sino-US trade relations and the ongoing general election campaign.

On geopolitics, market participants will remain glued to developing headlines - particularly any from President Trump, who has now landed in London for the NATO summit. It remains to be seen whether The Donald comments on the election, and whether his remarks help, or harm, Boris Johnson's bid for government.

Today's data calendar is uninspiring, with just a couple of second-tier releases due:

Things get a little more interesting in the early hours, with third quarter Australian GDP data due. The Australian economy is expected to have expanded at 0.5% QoQ, and 1.7% YoY - a relatively uninspiring pace of growth, which should give the RBA little reason to adjust their current policy settings.