The dollar gains on upbeat data releases, sterling firms as the chances of a Tory majority increase, and markets prepare for a quiet Thanksgiving day ahead

Wednesday was a busy day for financial markets, as a host of positive data releases boosted the dollar, and sterling gained ground as the chances of a Conservative majority increased.

A Busy US Economic Calendar

Thursday’s US economic calendar was as stuffed as a Thanksgiving turkey, with a host of data points being released ahead of today’s public holiday. Some of the highlights included:

The second estimate of Q3 GDP showed an unexpected upward revision to economic growth, with the US economy expanding by 2.1% on an annualised QoQ basis, 0.2% higher than the initial reading. While growth remains below the 3% rates that we were seeing when the economy was experiencing a sugar rush from President Trump's tax cuts, the expansion continues at a healthy pace.

As has now been the case for some time, consumer spending was the primary factor underpinning the ongoing expansion, adding 1.97pp to the GDP number, meaning that even greater emphasis is likely to be placed on consumer health going forwards. The other interesting detail in the GDP report was an uptick in inventory building, possibly due to the impending tariff increase on Chinese imports. 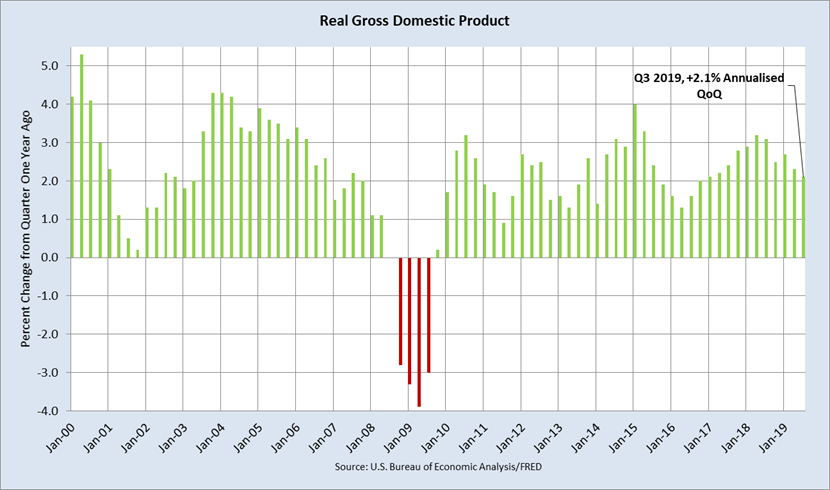 October's orders surpassed expectations, and were the main catalyst behind the dollar's strength on Wednesday. At the headline level, orders increased by 0.6% MoM, significantly better than the expected 0.8% contraction, and the fastest increase since July. Furthermore, the 'core' measures of the release also surprised to the upside, with orders excluding defence increasing by 0.1% MoM, and orders excluding defence and aircraft increasing by a storming 1.2% MoM.

The upside surprises bode well for the manufacturing sector, with orders being a useful leading indicator of production. Therefore, yesterday's solid report went some way to allaying fears of a deeper slowdown in the production sector, being a sign that activity may not be softening as much as had been feared. 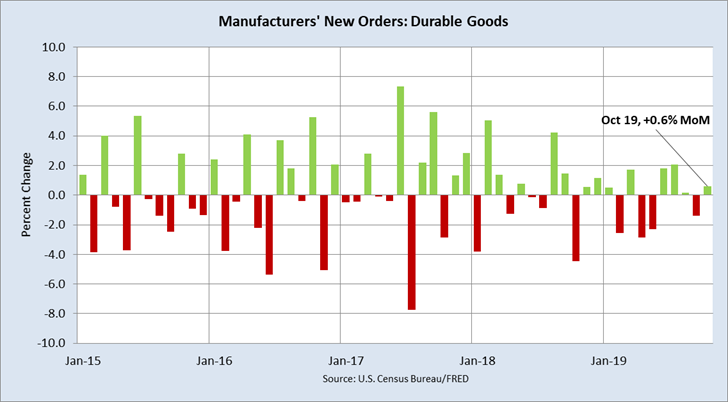 Completing the triumvirate of major releases was October's core PCE price index, the Fed's preferred inflation gauge. According to the measure, the pace of price increases softened to 1.6% YoY last month, the slowest pace since May.

The lacklustre inflation print will likely see the Fed leave monetary policy on hold for the foreseeable future, with the loose policy stance set to provide solid support to risk assets. While one would expect this to pose a mild headwind to the dollar, the greenback seems to be largely ignoring Fed policy at present. 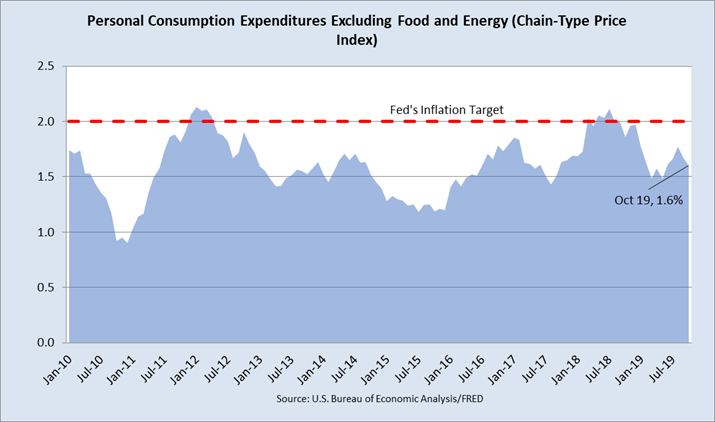 Yes, that's only half of Wednesday's US releases, though the others were of a lower-tier. In summary; last week's initial jobless claims dipped back towards trend levels, with 213,000 claims recorded; October's pending home sales missed expectations, with sales falling by 1.7% MoM; while the Fed's latest Beige Book indicated most regional banks seeing a 'generally positive' outlook.

The above data releases resulted in the dollar gaining ground against most peers on Wednesday, with market participants shrugging off benign inflation and instead focusing on the continued solid pace of economic expansion, and signs that ongoing manufacturing woes may be coming to an end.

The greenback ended the day 0.2% higher against a basket of peers, closing just below a 2-week high. As a result of the dollar’s advance, the euro lost ground, briefly falling below $1.10. Elsewhere, the dollar hit a 1-week high against the loonie, and its highest levels since May against the Japanese yen.

Of particular interest was the release of the much-anticipated YouGov MRP (multi-level regression and post-stratification) election model, which correctly predicted a hung Parliament at the 2017 poll. As such, the model has a sort of elevated status among opinion polls, and tends to be the focus of significant attention in the Westminster bubble.

Such a result on polling day would be positive for the pound, with a healthy Conservative majority set to provide markets with some certainty over Brexit in the medium-term, despite the post-divorce UK-EU trade negotiations that would have to take place.

Of course, while the opinion poll should be taken with a healthy degree of scepticism, the large poll sample (more than 100,000 voters) means the model should be more accurate than traditional polling. Nonetheless, there are of course some caveats; the projected Conservative margin of victory is less than 5% in around 30 of their projected seats, and there are still 2 weeks of the campaign remaining, meaning that things could - and probably will - change before polling day.

Markets, however, were thinking in the short-term, which saw sterling well-supported as investors priced in a greater chance of a Tory majority. Sterling ended the day 0.55% higher against the dollar, closing well clear of the $1.29 handle. Against the common currency, the pound added 0.7%, hitting a fresh 6-month high of €1.1765.

Markets are likely to remain well-confined to their recent trading ranges today, with the closure of US desks for Thanksgiving set to result in thinner than usual liquidity, and lower trading volumes.

On the data front, despite the lack of US releases, markets will have plenty of second-tier figures to chew over.

This morning, from the eurozone, the latest set of economic sentiment surveys are set to be released, set to point to sentiment remaining subdued, and well in pessimistic territory. The widely-watched business climate indicator is expected at -0.14, modestly above last month's -0.19, though indicative of a continued lack of optimism from the bloc's enterprises. Meanwhile, consumer confidence is expected at -7.2, unchanged from October, though the indicator is typically subdued, even at the best of times. The data is unlikely to have a significant impact on the euro, with a significant degree of negative economic news already being priced in.

Overnight, attention will shift to Japan, with a couple of releases due. Of particular interest will be the latest industrial production figures, set to show production increased at 1.9% YoY last month, marking the second straight increase in a gauge that has been disappointing all year. The latest unemployment figures are also scheduled, with joblessness set to hold steady at 2.4%, just above 30-year lows.

Finally, today's calendar of central bank speakers is sparsely populated, with only ECB Executive Board members Coeuré and Lane set to speak. Should either make remarks on policy, they will likely repeat their push for fiscal stimulus from eurozone governments, while emphasising that the ECB's policy arsenal is not yet fully depleted.