The latest market highlights and our views on the key developments as investors continue to seek shelter as the coronavirus epidemic escalates; sterling stumbles after the Government reveals their negotiating mandate; and the euro rips higher on murmurings of German fiscal stimulus

It was another rough day for risk appetite on Thursday, with concerns around the coronavirus epidemic continuing to dominate, with a risk-off feel permeating across asset classes once again. 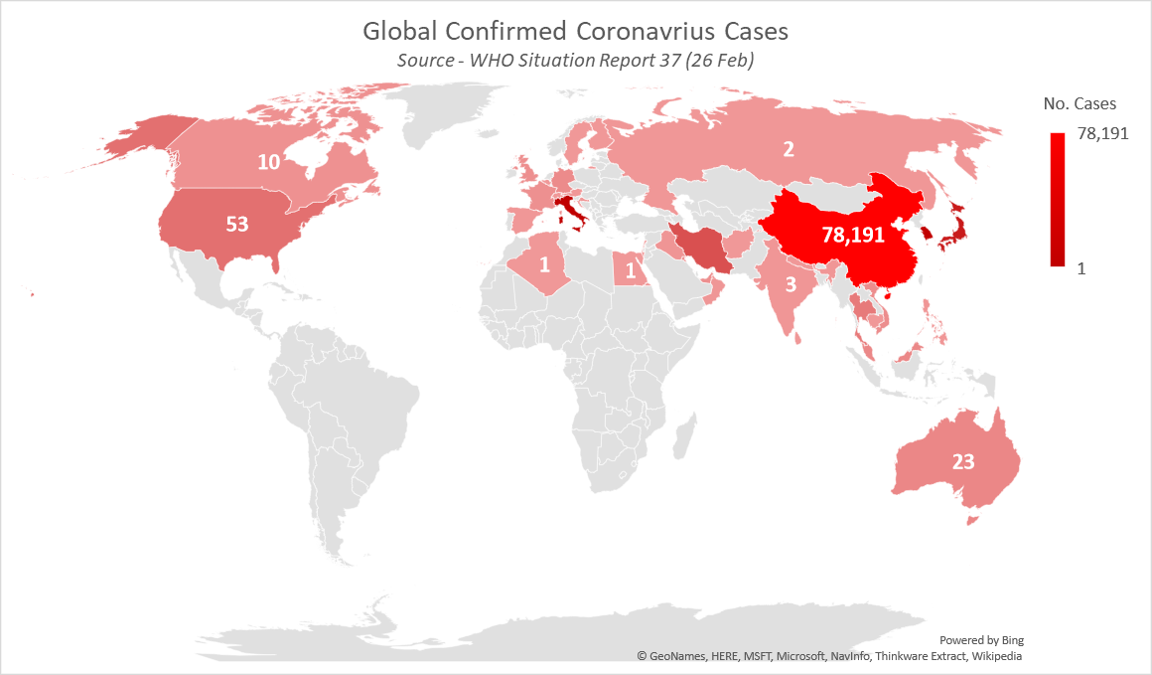 As a result of the continued concerns over the epidemic, and the impact that it will have on global growth, investors continued to seek shelter in safer climbs.

Starting with equity markets, this continued rotation into safe havens resulted in steep losses for major indices on both sides of the Atlantic.

In Europe, the pan-continental Stoxx 600 ended the day slightly above session lows, with losses of 3.56%. This puts the index formally in correction territory, having fallen more than 10% from the all-time high reached last month. 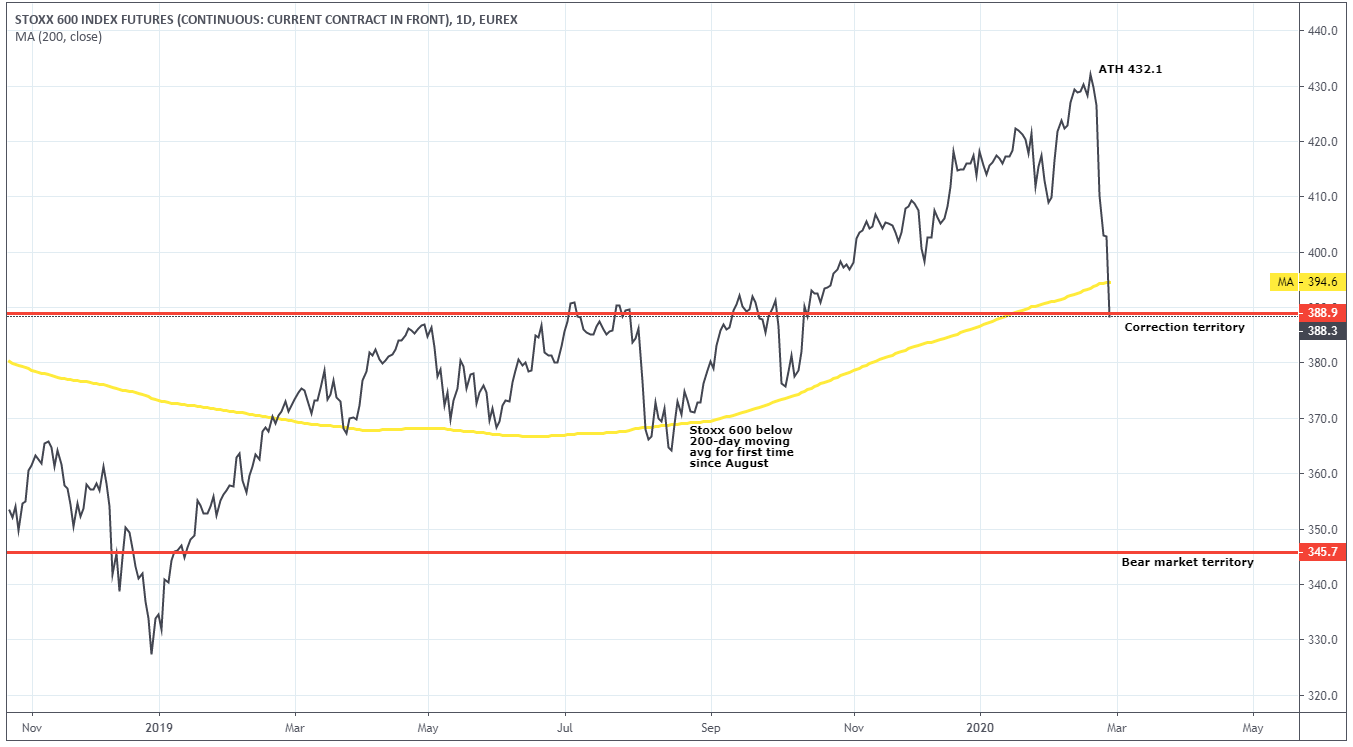 London's FTSE 100 led the losses in Europe, tumbling 3.5%, also entering a correction; while the German DAX plunged by 3.1%.

Across the pond, US equities ended the day at session lows, with all three major indices also entering correction territory, tumbling into the close as coronavirus concers continued to grip investors. The benchmark S&P 500 fell 4.19%, the tech-heavy Nasdaq shed 4.35%, while the Dow lost 4.26%, or 1,199 points - the index's second decline of more than 1,000 points this week, and the largest points drop on record.

Unsurprisingly, all sectors ended the day in the red, in another bloodbath for the stock market. 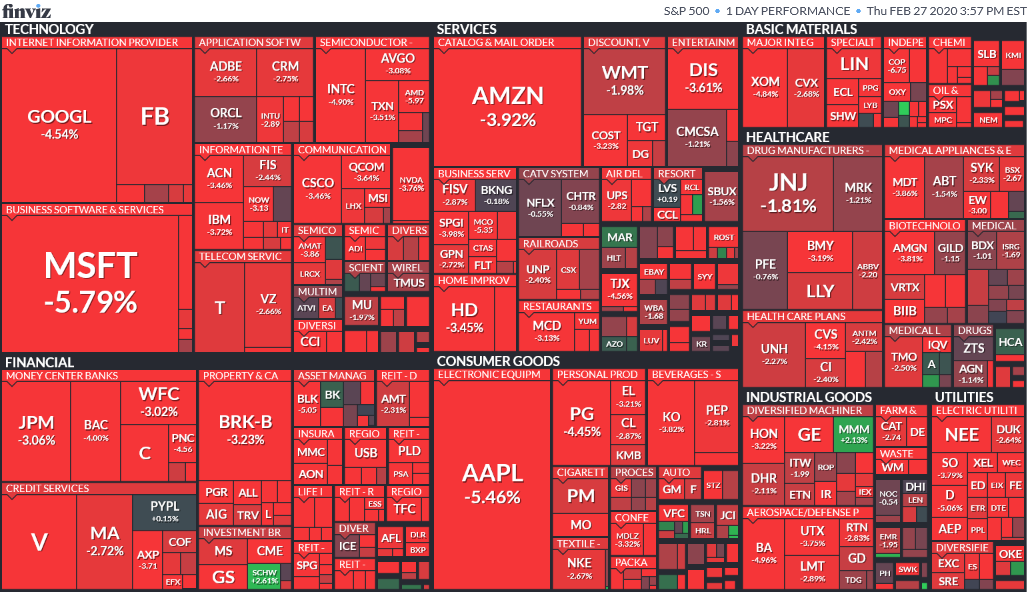 The ongoing sell-off in the stock market saw volatility remain elevated on Thursday, with the VIX gaining another 5 big figures, hitting a fresh 14-month high above the 35.0 handle, before modestly retracing.

Interestingly, another useful gauge of risk appetite, the ratio between the VIX and the 10-year Treasury yield, has surged over the last week, hitting its highest level on record, showing how significant the magnitude of the recent move into safe-havens has been.

Speaking of bonds, 10-year Treasuries continued their rally yesterday, hitting a fresh record low below 1.25%, falling 6bps on the day, amid heavy haven flows. This rally was mirrored across the curve.

Meanwhile, the rotation into safer climbs was also in evidence in the FX market, with the Japanese yen and Swiss franc remaining well-bid. However, despite its status as a safe-haven, the dollar faced stiff headwinds, falling to a 3-week low and posting its biggest 1-day loss against a basket of peers since last August, as markets priced in a significant degree of policy easing from the FOMC (more below).

Looking more broadly, it is important to realise why markets and investors are concerned about the economic impact of the virus. The simplest way to contextualise this is to look at the formula for calculating gross domestic product (GDP) - the most common measure of an economy's size and growth rate:

The ongoing epidemic is highly likely to hit three of the four components that make up GDP. Firstly, consumer spending is set to tumble in affected countries, due to ongoing lockdowns, a likely decrease in travel, and due to fear over taking part in large public gatherings. Meanwhile, investment - which has been subdued for some time - is highly unlikely to increase while uncertainties surrounding the virus persist. Finally, trade volumes will slow, as company shutdowns result in decreasing cross-border flows.

The only component of GDP that may remain firm, or even increase, is government spending; however only countries with ample fiscal space (such as Germany) would be able to increase spending levels.

As such, it is easy to see why concern is so elevated, given that the virus will likely detrimentally impact all components of the global economy.

Due to this, markets continue to aggressively price in a policy response to the outbreak. These signals are particularly in evidence in the rates market, where a 25bps Fed rate cut next month is a 75% chance, and more than 3 cuts are priced by year-end:

As mentioned yesterday, however, blanket rate cuts will likely do little to aid the economy recover from the supply-side virus shock; hence targeted fiscal stimulus is required.

Here in the UK, while market participants continued to monitor the coronavirus epidemic, it was Brexit that stole the limelight after the Government outlined their formal negotiating mandate for the upcoming UK-EU trade talks.

As expected, and as shown by the below table, the two sides' mandates differ significantly in a number of areas, raising concern that a free trade agreement (FTA) won't be struck in the 10 months remaining until the end of the transition period.

The aforementioned concerns exerted pressure on the pound, which fell 0.25% against the dollar, hitting its lowest levels in a week.

It was, however, against a stronger euro where sterling had more of a torrid time, ending the day nursing losses of more than 1% - the biggest one day fall in a month - with the pound falling to 5-week lows just above the €1.17 handle.

As mentioned above, the euro soared on Thursday, in a somewhat surprising move given the risk-off tone sweeping financial markets.

It would appear that the almost 1% jump in the common currency, which took the euro above the $1.10 handle for the first time in 3 weeks, was due to a combination of: 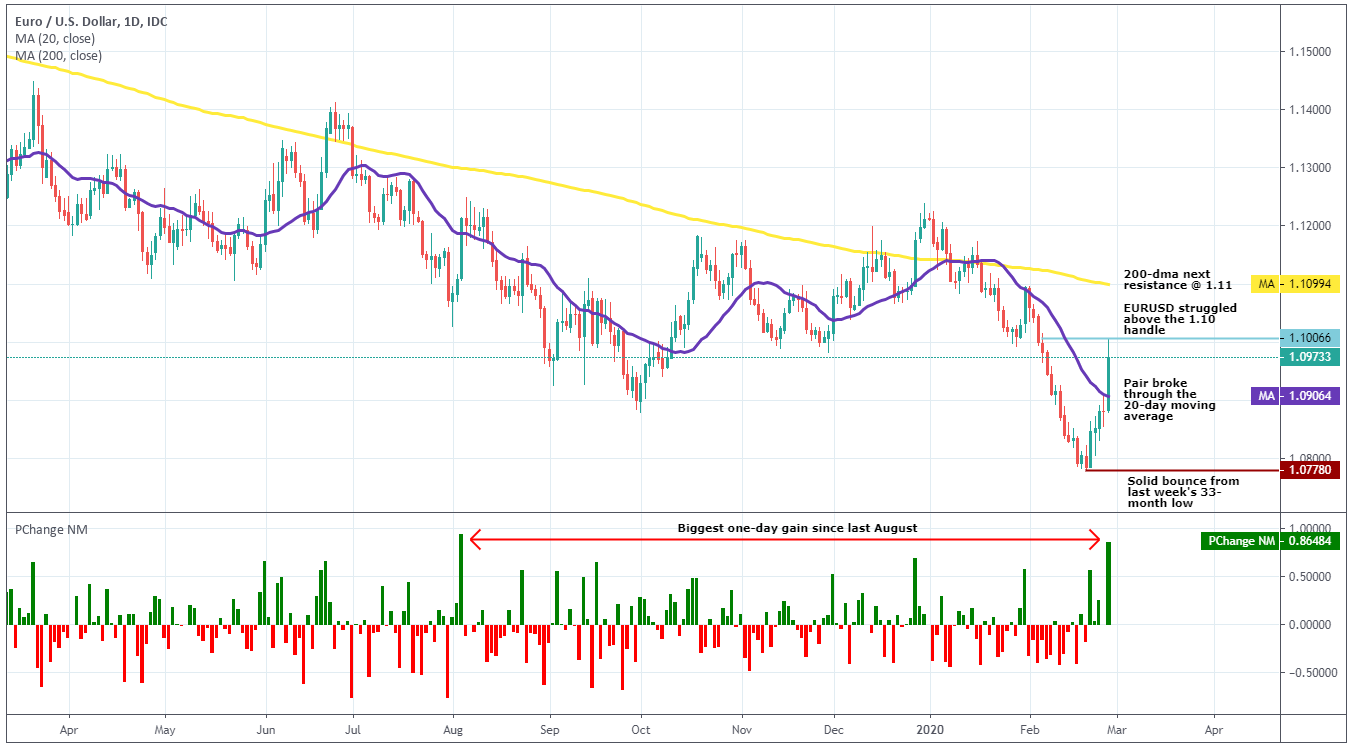 Once again, the coronavirus epidemic will be the main driver of risk appetite over the course of the coming day, however the economic calendar does bring a handful of highlights to keep an eye on:

Over the weekend, US politics will be in focus, as the Democratic primary process continues with primaries in South Carolina. The latest Chinese PMI figures will also be eyed as investors continue to gauge the economic fallout from the coronavirus epidemic.

The Week to Come

Looking ahead to next week, the data calendar is packed full of notable releases. The usual round of PMI surveys will be closely eyed for any virus-related impacts on both the manufacturing and services sectors; while fourth quarter GDP figures from Switzerland and Australia should show both countries ended 2019 in a sluggish manner.

Meanwhile, the monthly US labour market will be eyed, with expectations for earnings growth to continue at a healthy clip, and for the economy to have maintained a solid pace of jobs creation last month. Canadian jobs figures are also due.

Monetary policy will also be in focus, with rate decisions due from the RBA (Tues) and BoC (Weds). The former will likely keep policy on hold, though should maintain a cautious tone given the numerous downside risks facing the Australian economy. The BoC's decision should be of more interest, with policymakers set to strike a dovish tone given the economy's sluggish momentum. Don't rule out, however, a surprise 'insurance' cut next week.

The US political landscape should also become clearer next week, as the Democratic primary process continues with 'Super Tuesday', when around 35% of available delegates are up for grabs. Markets will be paying close attention to the voting, with risk appetite likely to remain pressured if left-wing Vermont Senator Bernie Sanders further cements his place as front-runner for the nomination.