The latest market highlights and our views on the key developments as the coronavirus policy response continues with the BoC announcing a 50bps cut; risk appetite firms after Joe Biden storms 'Super Tuesday'; and a number of central bank remarks come into focus today

After the Federal Reserve surprised markets with an emergency 50bps rate cut on Tuesday, the policy responses to the coronavirus epidemic continued yesterday, with the Bank of Canada the latest to act.

The BoC announced, at yesterday's scheduled policy decision, a 50bps interest rate cut -- the first since mid-2015 -- bringing interest rates to 1.25%, their lowest level in 18 months.

The move should come as no surprise given how far behind the global policy curve the BoC had become, and given the Fed's surprise rate cut yesterday, with Canadian policymakers having noted on numerous occasions their desire not to have policy rates higher than that of their US counterparts.

Loosening policy, as discussed yesterday, will not solve the coronavirus itself, though policymakers are clearly attempting to cushion the blow to the economy in the only way that they are able. Further easing from the BoC is highly likely in the coming months, given the BoC's preparedness to 'adjust policy further if required', and the continued aggressive path of easing priced by markets.

In reaction to the policy decision, the Canadian dollar came under pressure, despite the BoC delivering only slightly more than the 42bps of easing that had been priced in before the decision. The loonie was 0.25% lower at the end of London trading, having once again broken above the $1.34 handle.

Elsewhere, expectations of a policy response continue to grow, with rate cuts priced in across the globe. Interestingly, markets were awash with unconfirmed chatter of an emergency 25bps Bank of England rate cut on Wednesday morning, though such action failed to materialise -- even though the rumours did keep most sterling traders glued to their desks at the top of each hour.

Nonetheless, OIS markets continue to price in an aggressive path of easing from the BoE, with expectations for 40bps worth of cuts to be delivered either on or before the 26th March policy decision.

These rumours resulted in choppy trading conditions for the pound which, despite closing unchanged against the dollar, chopped between $1.2775 and $1.2825 for the majority of the trading day.

Markets also expect the ECB to deliver a 10bps rate cut next week, taking the deposit rate even deeper into negative territory, as expectations of a co-ordinated global policy response to the coronavirus continue to mount.

This pricing exerted pressure on the euro, which snapped its 4-day winning streak to end the day nursing losses of 0.4%.

Turning to the virus itself, the rapid spread of the epidemic continues, with around 94,000 cases now reported worldwide. Here in the UK, 85 cases have now been confirmed, an increase of 34 on a day prior -- the most since the outbreak began. Globally, the virus continues to spread, with the epidemic quickly becoming a pandemic in all but name. 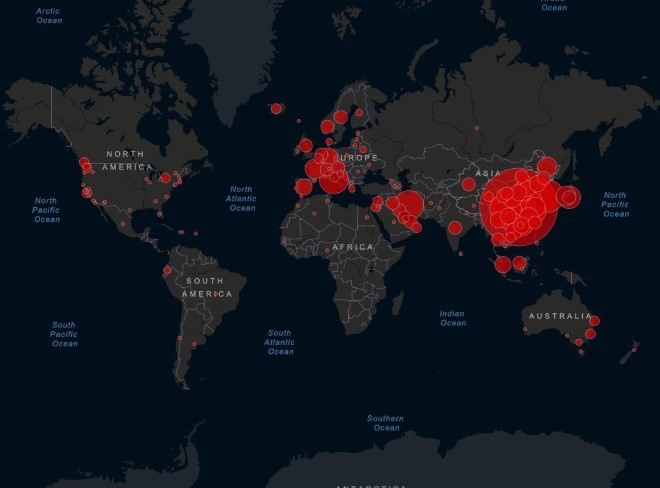 The primaries, which see around a third of all delegates allocated, and voters go to the polls in 14 states across the US, saw a surge in support for Biden, with the former Vice President now leading the delegate count.

Furthermore, according to betting markets, Biden is now the firm favourite to win the Democratic nomination and take on President Trump in the November election, showing just how quickly his campaign has gone from languishing in last place, to front-runner status.

Starting with equities, markets in Europe extended yesterday's gains, with utilities leading the way. The pan-continental Stoxx 600 closed 1.2% higher, while London's FTSE 100 closed with gains of 1.45%.

Across the pond, US markets chalked up solid gains, erasing Tuesday's losses and more, as volatile trading continued. The benchmark S&P 500 ended the day 4.2% higher, while the 30-stock Dow Jones gained 4.5%, and the tech-heavy Nasdaq added 3.9%. All sectors ended the day in the green, with healthcare leading the gains. 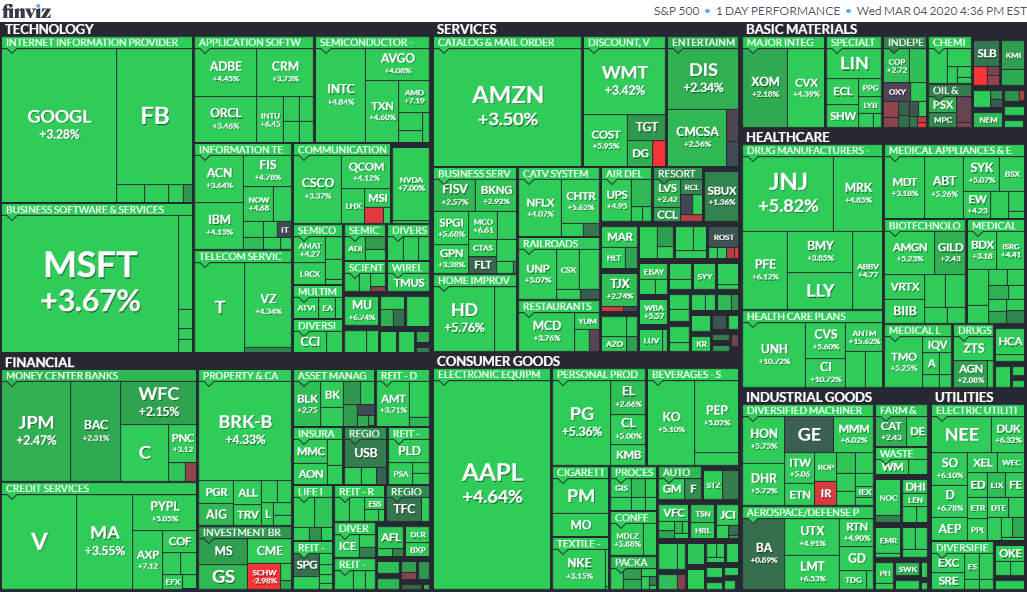 In the bond market, Treasury yields continued to decline as markets continued to price in additional policy easing from the FOMC, and investors continued to seek shelter amid the ongoing coronavirus outbreak. Benchmark 10-year yields fell a further 4bps on Wednesday, remaining under 1%, while yields at the short end of the curve fell by around 8bps.

This continued bull steepening of the curve -- with the 2s10s spread hitting its widest level this year -- shows, as discussed yesterday, that the bond market continues to scream for additional rate cuts. 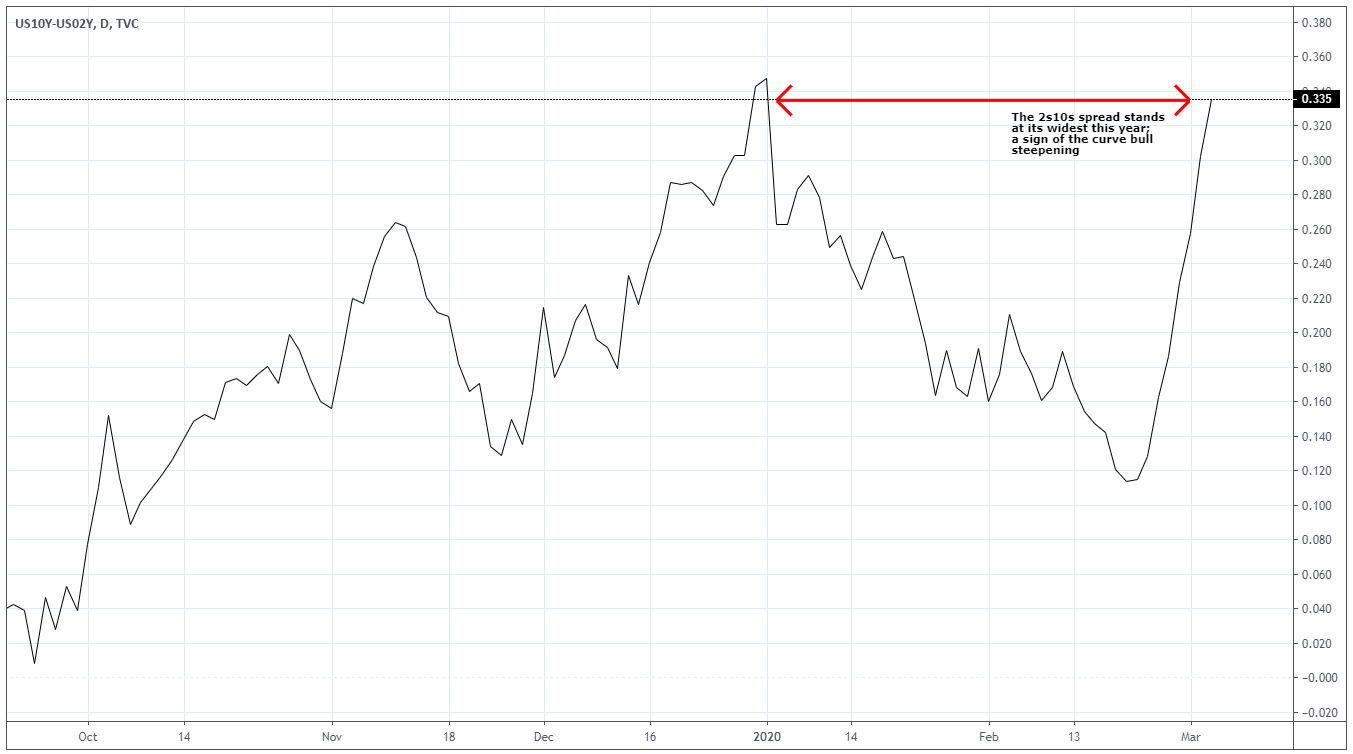 In FX, the improving risk environment provided a tailwind for the antipodeans; which saw the Aussie dollar add around 1%, and the Kiwi dollar trade around 0.3% higher. Yesterday's scorecard is as follows: 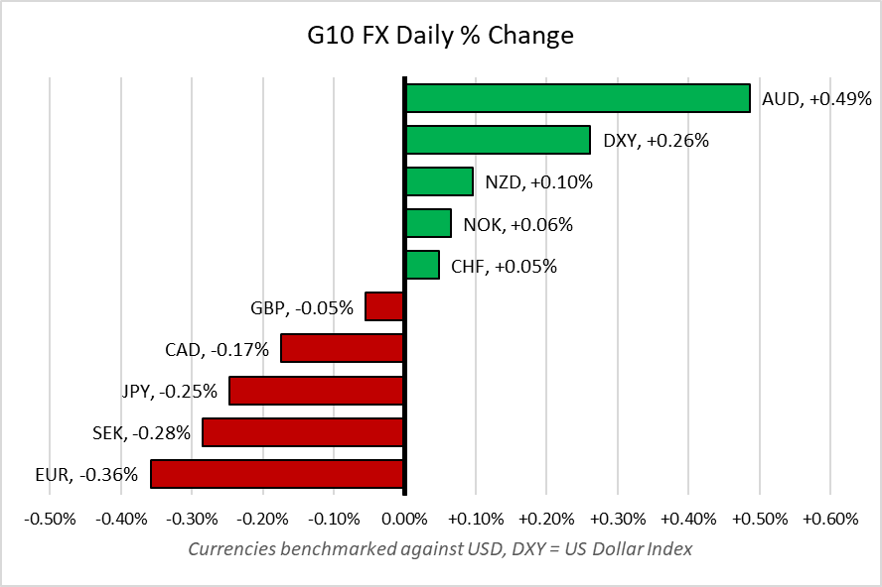 Finally, in commodities, oil prices lost ground as nerves crept in ahead of today’s OPEC and OPEC+ meetings despite expectations that deeper production cuts will be announced. Global benchmark Brent settled 1.4% lower, while US WTI crude lost 0.85%.

Gold prices also faced headwinds, falling 0.35% in the spot market, as a result of the improving risk appetite.