The latest market highlights and our views on the key developments as sentiment stays pressured by coronavirus concerns; oil tumbles as OPEC+ crumbles; and was Friday really jobs day?

Coronavirus concerns remained at the forefront of investors' minds on Friday, as the week drew to a close with sentiment souring as the COVID-19 epidemic continues to spread rapidly across the globe.

The number of confirmed cases now numbers in excess of 100,000 globally - with focus remaining on the rapid spread of the virus outside China, with the epidemic now being a pandemic in all but name.

Of particular concern is the rapid increase in cases in Italy, which has now reported nearly 6,000 cases, and has begun to impose a quarantine on the northern Lombardy region - home to around a quarter of Italy's population, and including the city of Milan.

Furthermore, as the below from Bloomberg shows, Lombardy accounts for around a fifth of Italian GDP, meaning that the lockdown measures - set to be in place until early April, will almost certainly tip Italy into a recession. 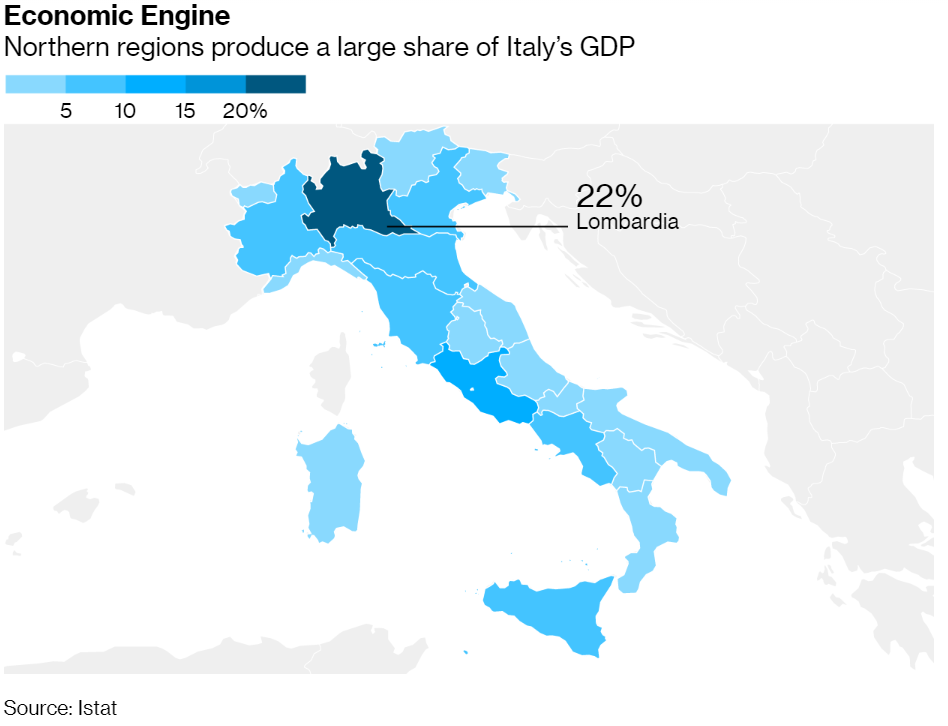 Meanwhile, here in the UK, the number of cases is beginning to increase exponentially, with more than 200 confirmed infections now reported.

As the number of infections increases, and the virus spreads rapidly across the globe, the economic impact of the epidemic is set to become more severe. My thoughts on the economic implications of the coronavirus epidemic can be found in our latest white paper.

Turning to markets on Friday, we must start with fixed income, with Friday bringing another day of unprecedented moves in Treasuries.

Benchmark 10-year yields, which move inversely to price, fell once again, tumbling more than 15bps over the course of the day, falling to fresh all-time lows below 0.7%. In the last month, the 10-year yield has more than halved from the 1.63% seen in February, showing just how significant demand for Treasuries has been.

Yields also fell across the curve, with 2-year yields declining by 7bps, and 30-year bonds falling a whopping 27bps to record lows below 1.3%.

Interestingly, the bull steepening that had been in evidence earlier in the week gave way to a bull flattening of the yield curve on Friday - with long-end yields falling faster than yields at the short-end of the curve.

This phenomenon shows the bond market sending two messages. Firstly, a lowering of inflation expectations - potentially indicating concern that central banks won't be able to cushion the global economy from the impact of coronavirus; and secondly, showing the market continuing to price in an aggressive degree of policy easing.

The bull flattening can be easily shown by the 2s10s spread, which narrowed by around 11bps on Friday, now standing at 24bps.

Meanwhile, the continued rotation into safe-havens posed headwinds for equities, with stocks once again tumbling across the globe.

In Europe, Friday saw yet another sea of red across the board, with all major bourses nursing losses of between 3% and 4%. 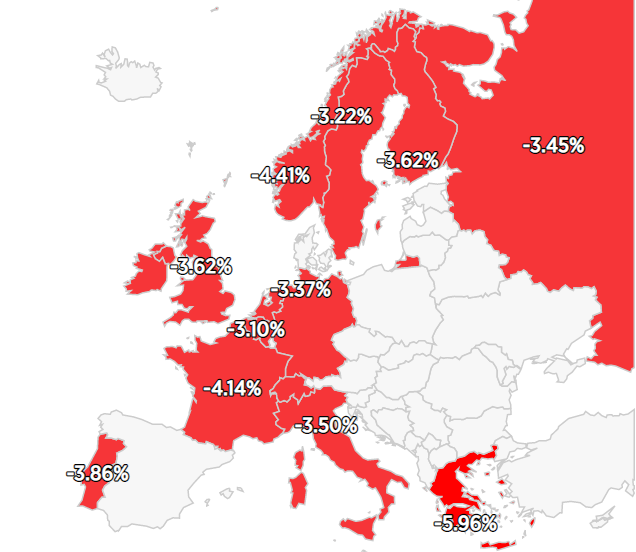 The pan-continental Stoxx 600 ended the day 3.7% lower, with losses led by the oil and gas sector - more below. Bank stocks were also pummelled, as markets continue to adjust to a lower interest rate outlook in the months ahead.

Across the pond, US equities also ended the day in the red, though sharply pared losses into the close with an impressive end-of-day rally. The benchmark S&P 500 ended the day with losses of 1.7%, though was down by as much as 4% intraday. Meanwhile, the tech-heavy Nasdaq lost 1.8%, and the 30-stock Dow Jones Industrial Average closed with losses of 0.9%.

For the week as a whole, despite the rollercoaster-like conditions, all three major indices eked out small weekly gains, with the S&P 500 adding 0.6% over the past five days.

Nonetheless, looking technically, indecision remains the name of the game for the S&P, with the index yet to test the recent bottom and either bounce convincingly, or begin another leg lower.

Fundamentally, however, my bias would be for equity markets to remain pressured, with sentiment around the coronavirus epidemic likely to worsen before things improve.

Looking at volatility, the VIX - the 'fear gauge' for the S&P 500 - remains elevated, at one point on Friday hitting an 11-year high of 54.9 showing that market participants remain unnerved by the unknowns surrounding the virus and its economic implications.

Turning to FX, haven flows were once again the order of the day, resulting in both the Japanese yen and Swiss franc gaining ground. 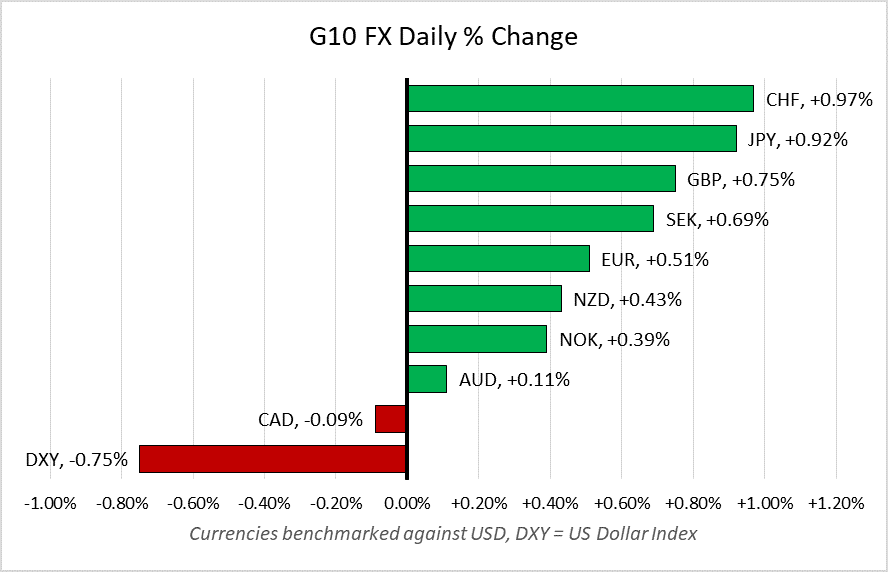 In contrast, the dollar continued to face headwinds, coming under pressure from falling Treasury yields and increasingly aggressive pricing for FOMC's policy outlook - with markets now seeing another 50bps cut as a certainty at the Fed's next policy decision in just under a fortnight's time.

The pressure on the dollar saw all major peers gain ground, and sent the dollar index (DXY) - which tracks the dollar against a basket of peers - tumble to its lowest levels since February 2019, having lost more than 4% in the last 2 weeks.

Gold prices were also well-supported by the solid demand for havens, with the precious metal adding another 0.4% on Friday; taking the weekly advance to 6.3%, the biggest such gain since January 2009.

While the coronavirus outbreak continues to wreak havoc on oil prices, traders now have to worry about oversupply as well, with Russia's rejection of OPEC's proposed production cuts leaving members free to 'pump at will' from the beginning of April.

The move came as Russia, believing that price-supporting production cuts would primarily benefit the US shale industry, seized its opportunity to try and crash prices to harm the US, seeing OPEC as little more than collateral damage.

As a result of the increasing likelihood of a war for market share, which will see producers pumping greater volumes and undercutting prices, both major oil blends cratered as the week drew to a close.

Global benchmark Brent, which had already fallen around 30% this year, tumbled a further 9% on Friday, settling at $45.27bbl, its lowest level since mid-2017.

US WTI crude also tumbled, losing more than 10% on Friday, as both blends recorded their sharpest daily losses in more than 5 years.

With a price war now brewing between the world's major oil producers, crude looks to only be heading one way - likely exerting significant pressure on the NOK and CAD; the former of which fell to a record-low against the euro on Friday.

The Most Inconsequential Jobs Report in Memory

Normally, the first order of business for my post-payrolls Morning Note would be to comprehensively cover the data, its impact on the markets, and on the monetary policy outlook; but Friday's data was different.

Put simply, with investors and policymakers alike focused squarely on the coronavirus epidemic, nobody was paying attention to February's US labour market report.

Nonetheless, it was another blowout month for jobs growth, which saw the US economy add 273,000 jobs - pushing the 3-month average of jobs gains to a 3-year high 243,000. 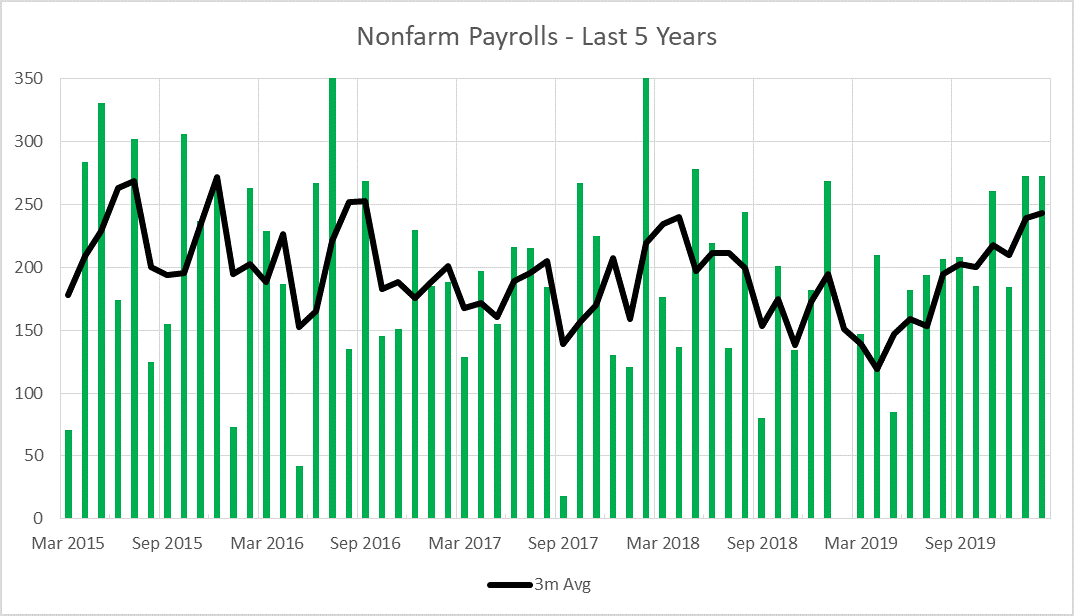 Furthermore, unemployment fell back to a 50-year low of 3.5% last month; while earnings continue to increase at a healthy clip of 0.3% MoM, pushing the annual pace of earnings growth to 3.0%. 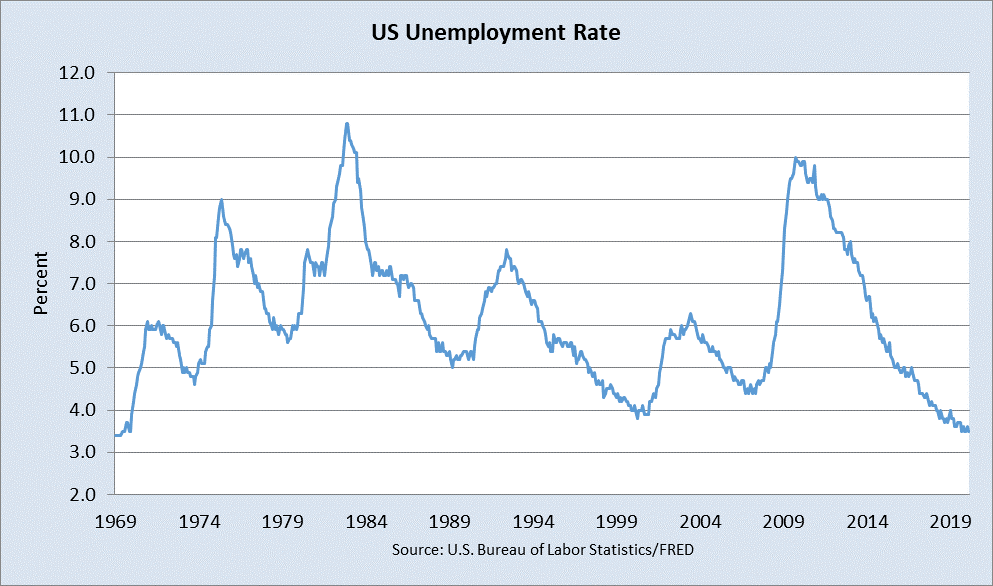 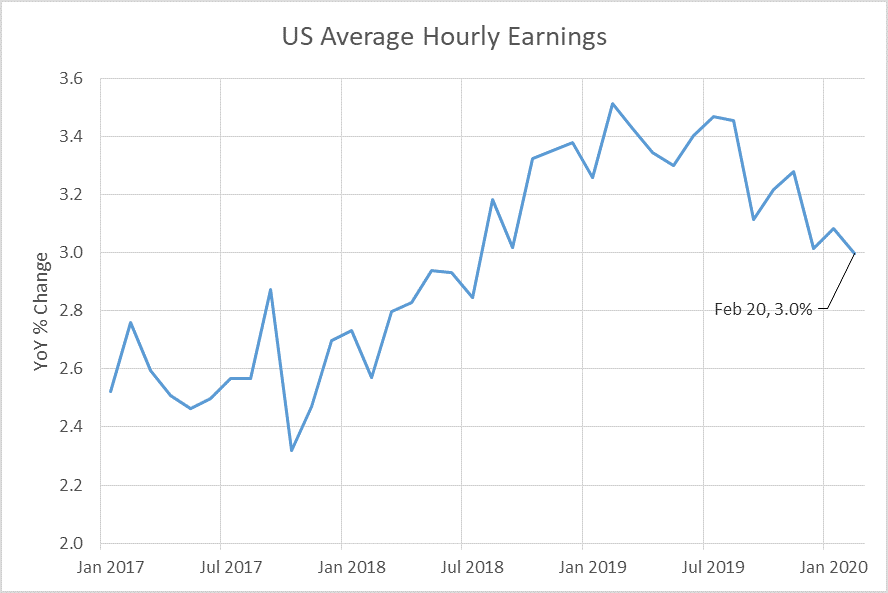 Despite the solid data, the payrolls report was largely irrelevant, doing little more than to give us a benchmark with which to compare the US labour market once the impacts of the coronavirus filter into the data in the months to come.

As a result, there was no noticeable market impact from the jobs report. In fact, if you only looked at the charts, you wouldn't have even known it was jobs day.

As you can probably guess, coronavirus will remain the primary topic of conversation this week, as market participants continue to assess the likely economic implications of the epidemic and price in a policy response on both the monetary and fiscal sides.

Speaking of a policy response, this week's Budget (Weds) will see Chancellor Rishi Sunak lay out the UK's fiscal response to the coronavirus epidemic - with measures such as increased sick pay and 'tax holidays' reportedly on the table to assist businesses in dealing with the epidemic. Furthermore, don't rule out the possibility of the Bank of England taking action in combination with the Treasury, as markets continue to price in roughly 40bps of cuts on or before the 26th March policy meeting.

Meanwhile, monetary policy will also be eyed in the eurozone, with Thursday bringing the latest ECB policy decision. Despite markets pricing a 10bps depo rate cut as a certainty, questions remain over the efficacy of such a measure. A full preview for the ECB will follow later in the week, however policymakers face a tough ask to insulate the eurozone economy from a twin supply-demand shock with such an exhausted policy arsenal.

Finally, note that the US and Canada switched to daylight saving time this weekend, leaving New York 4 hours (rather than 5) behind London. As a result, until 28th March, US releases will be an hour earlier than usual for those of us in the UK.