The latest market highlights and our views on the key developments as coronavirus concerns roil markets, savaging risk appetite and resulting in a continued rotation into havens; while attention shifts to today's US labour market report

Risk appetite was once again crushed on Thursday - with Wednesday's risk rally now little more than a distant memory, as attention shifted back to the rapid spread of the coronavirus and its impact on the global economy.

The spread of the epidemic - which is now a pandemic in all but name - continues at a rapid pace, with confirmed cases approaching 100,000 worldwide.

As mentioned previously, it is now the rapid spread of the virus outside China - in countries such as Italy and South Korea - that is of primary concern for investors. The more countries that are affected by the virus, the greater the impact on the global economy, and the more prolonged the impact is likely to prove.

The below chart, which shows the number of confirmed cases outside China, provides a stark representation of why risk aversion remains the order of the day.

As you can easily see, the number of cases outside China is increasing at an exponential rate, easily proving how the outbreak remains far from being under control.

Here in the UK, and speaking of control, the government are close to moving to the second stage of the coronavirus 'action plan'; abandoning attempts to 'contain' the virus, and instead focusing action on 'delaying' the peak of any epidemic until the spring.

Meanwhile, markets continue to aggressively price in a monetary policy response to the epidemic, expecting that - once again - central banks will be able to loosen policy to save the day.

Overnight swap markets now price a full 10 bps from the ECB next week, while pricing a somewhat ludicrous 40bps worth of cuts from the BoE on or before the 26th March policy decision.

It is, however, in the US where markets are once again attempting to bully the Federal Reserve into further action. Not content with this week's emergency 50bps cut, futures now price a 100% chance that the FOMC will announce another 50bps rate cut at their next meeting.

Yes, that's markets expecting 100bps worth of easing in the space of just over 2 weeks from the Fed.

That's not all however, with the futures curve now indicating investors expect a total of 100bps worth of cuts by year-end, which would leave rates near 0% in December.

As discussed at length, a monetary policy response is not the best medicine with which to help the global economy recover from the coronavirus; this would be targeted fiscal stimulus measures. Such measures are beginning to be unveiled, with the House of Representatives passing an $8bln spending package, and Italy reportedly preparing a stimulus package of €7.5bln.

None of these measures did much to help risk appetite on Thursday, however, with investors once again seeking shelter in safer climbs.

Starting with equities, the European heatmap was once again a sea of red, with all bourses ending the day in negative territory.

At a broad level, the pan-continental Stoxx 600 lost 1.3%, though did manage to close well above session lows. In London, the FTSE 100 closed 1.5% lower, while the eurozone banks index once again dipped back into a bear market as investors adjusted to the lower interest rate outlook.

Across the pond, US markets tumbled, with the benchmark S&P 500 losing 3.4%, the fourth straight day that the benchmark index has chalked up a daily move of more than 2%. Meanwhile, the tech-heavy Nasdaq lost 3.1%, and the 30-stock Dow Jones Industrial Average closed 3.6% lower, a loss of just shy of 1,000 points.

This week, however, despite the significant levels of volatility, the net change in the S&P 500 is minimal, with the index having failed to either form a bottom and make a significant recovery, or to extend losses to the downside.

The ongoing weakness in equities saw the recent rally in Treasuries continue. 10-year yields fell by as much as 10bps on Thursday, falling to a fresh all-time low below 0.9%. 30-year bonds also hit record lows.

This last point is exemplified by the ongoing bull steepening of the yield curve, with short end yields continuing to fall faster than those at the longer end of the curve. The 2s10s spread, for instance, now stands at 34bps, close to its widest levels since October 2018.

Turning to FX, risk aversion was also the order of the day, with Thursday's scorecard showing that the classic defensive playbook was once again in effect.

The major mover was, unsurprisingly, the Japanese yen, which gained 0.95%, taking USDJPY below the 107 handle for the first time since last October. The Swiss franc also gained ground, likely to the consternation of the Swiss National Bank.

In contrast, antipodean FX once again faced headwinds, with the Kiwi dollar paring all of its daily gains to end the day flat; and the Aussie dollar dipping 0.45%.

The dollar also struggled, declining in line with the increasingly aggressive Fed pricing, resulting in the buck ending the day 0.4% lower against a basket of peers, close to a year-to-date low.

The first Friday of the month means one thing for financial markets; it's jobs day.

The monthly US labour market report, referencing the employment situation in February, will be released this afternoon, with markets expecting the labour market to remain tight, and jobs growth to continue apace.

Starting with payrolls, median expectations are for the US economy to have added 175,000 jobs last month; a fair way below last month's 225k print, and the 3-month average of 211k.

Heading into the payrolls figure, leading indicators paint a relatively positive picture. February's ADP employment change figure surprised to the upside, pointing to the addition of 183,000 jobs last month, while the employment components of both the ISM manufacturing and non-manufacturing PMIs are on the rise - hitting 4- and 7-month highs respectively.

On the flip side, the last read on US job openings - while a vastly lagging indicator - fell to a 2-year low, while initial jobless claims appear to have bottomed, with the 4-week average of claims standing at a one-month high 213k.

Nonetheless, the picture as a whole points to a continued solid pace of hiring, albeit a continued slowdown from last year's breakneck speed.

Meanwhile, unemployment is expected to remain close to 50-year lows at 3.6% in February, pointing to the US economy remaining close to full employment.

This continued tightness should see average hourly earnings continue to increase at a healthy clip. Last month, earnings are set to have increased by 0.3% MoM, resulting in annual growth of 3%. 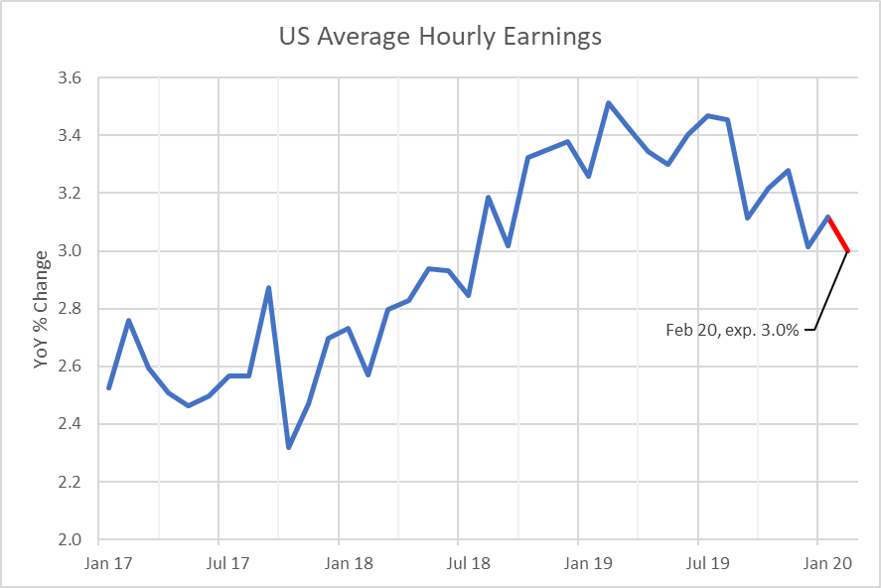 Despite expectations for the jobs report to once again paint a solid picture of the US labour market, it is difficult to remember a payrolls report that has been more inconsequential. One shouldn't place too much emphasis on February's data for the following reasons:

The Week to Come

Looking to the week ahead, the coronavirus will continue to be the primary driver of risk sentiment, with market participants set to once again pay close attention to the potential for a co-ordinated global policy response.

Speaking of policy responses, next Thursday's ECB meeting will be of particular interest, with markets pricing a 10bps cut, though the efficacy of taking rates deeper into negative territory will surely be questioned by the Governing Council.

Attention will also centre on Chancellor Rishi Sunak's first budget. The budget, which was once expected to deliver a significant increase in government spending and herald the announcement of a vast range of infrastructure projects, is now expected to focus on a targeted fiscal response to the coronavirus.

Meanwhile, data will continue to take a backseat, and next week's calendar is light. Releases of note include final Q4 GDP from the eurozone, February's US CPI figures, and March's preliminary UMich consumer sentiment report.