The latest market highlights and our views on the key developments as sentiment rebounds on hopes of a policy response to the coronavirus epidemic; the euro continues to surge higher; and US politics comes into focus as 'Super Tuesday' arrives

Central banks are on their way to save the world again; at least that's what the market appears to think.

After last week saw coronavirus concerns grip financial markets, resulting in a sharp rotation into safe-havens, the central bank put has re-emerged as policymakers provide assurances that looser policy is on the way. Over the last 2 trading days, we've heard:

From these comments, it is clear that policymakers from around the globe are concerned about the economic impact of the coronavirus outbreak, and by the steep sell-off seen in global equity markets last week; it looks like we have reached the central bank put's strike price.

Further boosting these expectations were reports that G7 finance ministers and central bankers would be hosting a conference call today, ratcheting up expectations that the G7 would deliver some form of co-ordinated policy action -- either monetary, fiscal, or both.

Despite clear indications that stimulus is on the way, policymakers would likely -- in an ideal world -- prefer to wait to review economic data that incorporates the early impact of the coronavirus before acting. However, markets appear to have forced policymakers' hands, pricing in an aggressive path of policy easing for central banks across the G10.

Looking specifically, markets expect the most aggressive policy easing to come from the Federal Reserve. A week ago, one would have been considered crazy to think that the FOMC would take any policy action at the March meeting. Now, the question is whether the Fed will cut 25bps, 50bps or even 75bps in three weeks' time; with some even questioning whether we will see an inter-meeting cut for the first time since 2008.

In my view, a 25bps cut is a done deal, and a 50bps cut is only likely in the event that the FOMC want to send a more aggressive easing signal to financial markets; an inter-meeting cut appears unlikely at present.

Nonetheless, beyond March, a significant degree of further policy easing is priced in, with markets expecting as much as 100bps before year-end. 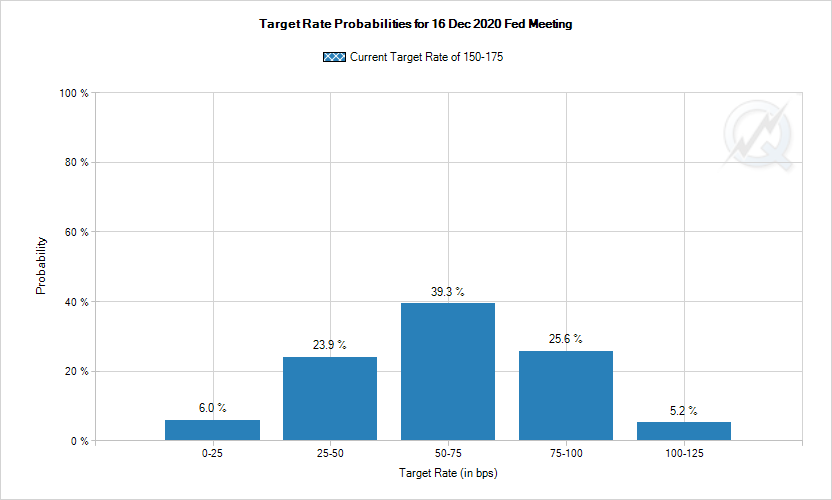 This aggressive pricing exerted pressure on the dollar, which ended the day at a 6-week low against a basket of peers, nursing losses of 0.65% on the day, the buck's biggest one-day loss since late-January.

Elsewhere in G10, havens remained well-bid, while both antipodeans also found some demand amid the improving risk environment.

Likely to the disdain of the SNB, the Swiss franc was investors haven of choice on Monday, gaining around 0.6% against the dollar. The Japanese yen also ticked higher; while the risk-sensitive Aussie and Kiwi dollars gained ground in line with improving risk appetite as the day progressed.

Turning to equity markets, it was a mixed picture in Europe where stocks pared early losses in the last hour of trading after news of the G7 conference call broke and hopes of a significant stimulus package increased. 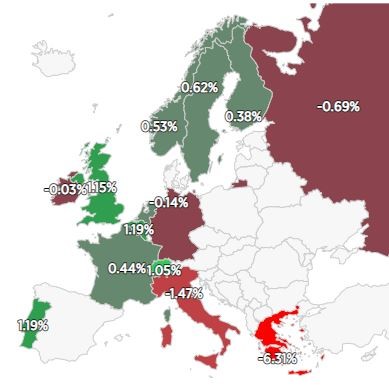 Across the pond, US equities ended the day with impressive gains, strongly rebounding after last week's violent sell-off. The benchmark S&P 500 ended the day 4.6% higher, the Dow added more than 5%, while the tech-heavy Nasdaq gained 4.5%; with all major indices now having pared around half of last week's losses.

By and large, barring some weakness in the travel sector, it was a rare sea of green across the S&P 500 yesterday. 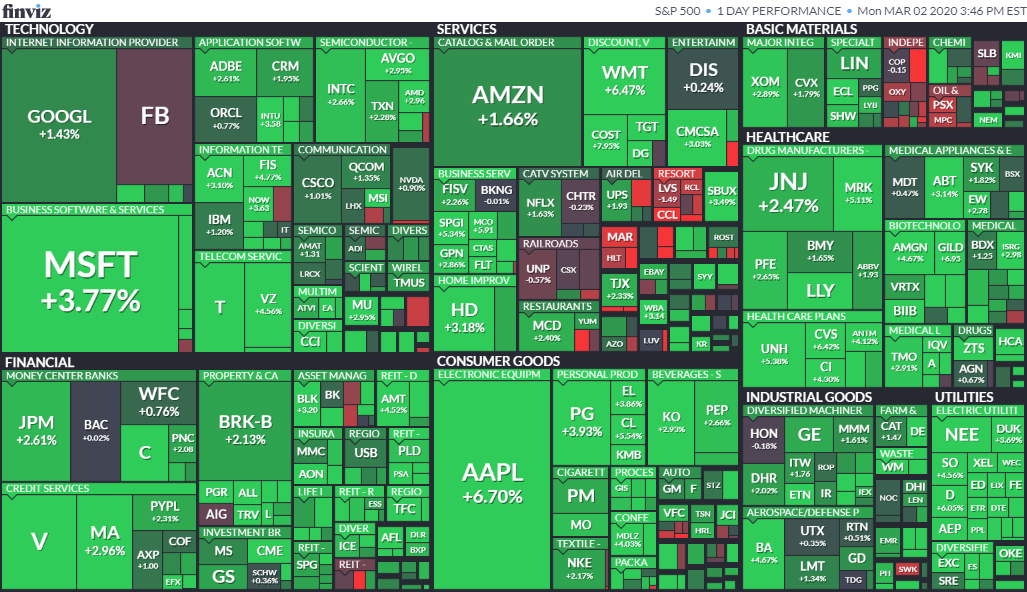 Meanwhile, a further sign of reassurance can be seen in the VIX -- the S&P 500's volatility gauge -- which pulled back to the low 30s on Monday, signifying a reduction in volatility and a soothing of concerns among market participants. 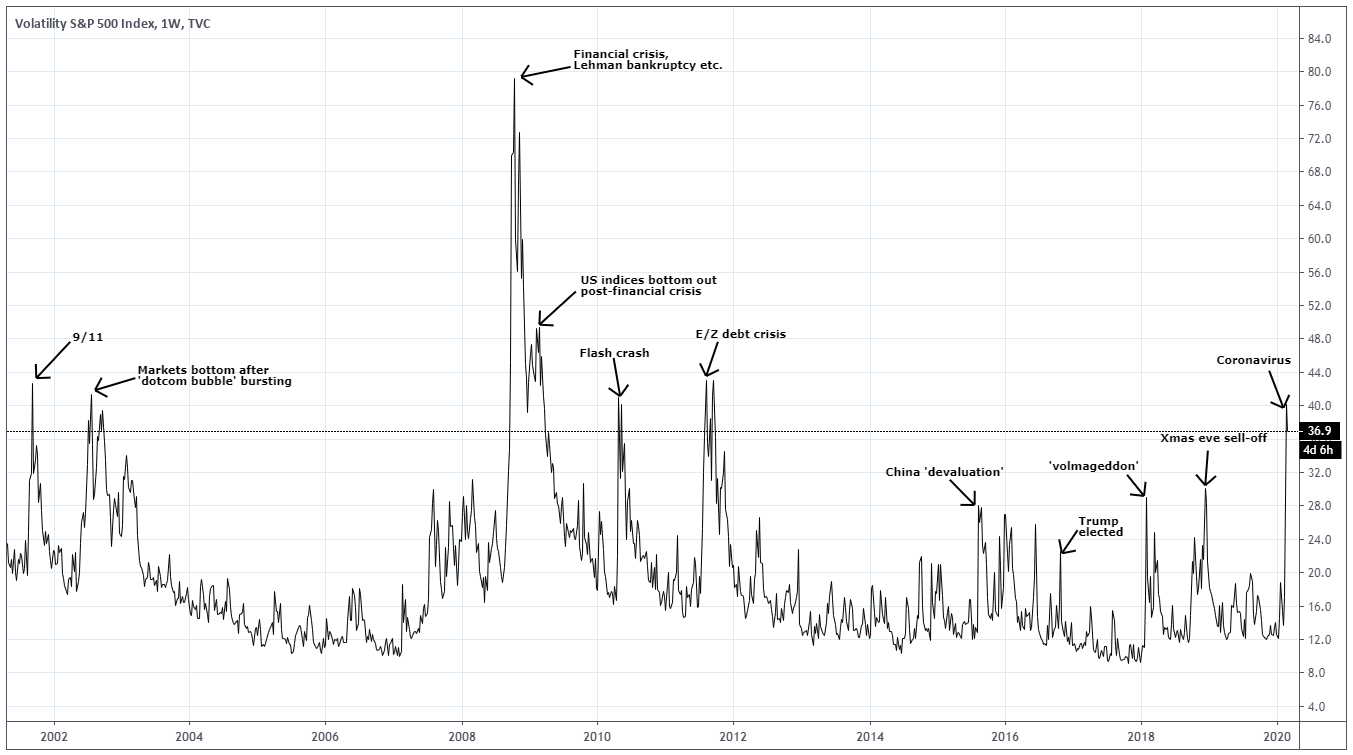 Meanwhile, in the bond market, Treasury yields continued to fall yesterday amid a steady haven bid. 10-year yields fell 7bps to a fresh record-low of 1.03%, while 30-year yields fell 2bps close to the 1.60% mark.

More interestingly, it is important to look at what the shape of the yield curve is telling us. Over the past week, we have seen a bull steepener in evidence -- where short-term rates have been falling faster than long-term yields. This is a classic sign that the market is positioning for imminent policy easing from the Fed. 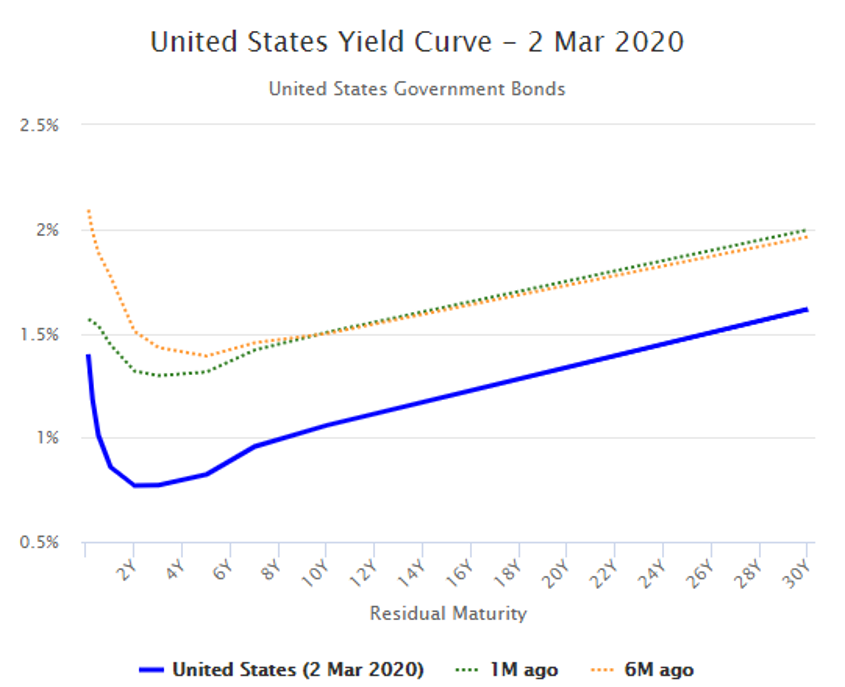 Turning to commodities, oil prices gained ground as markets grew more optimistic that OPEC would announce deeper production cuts at this week's meeting; both Brent and WTI settled around 4% higher.

In terms of the coronavirus itself, cases have now reached almost 90,000 across the globe; with particularly close attention being paid to the rapid spread of the virus in Italy, South Korea and Japan. 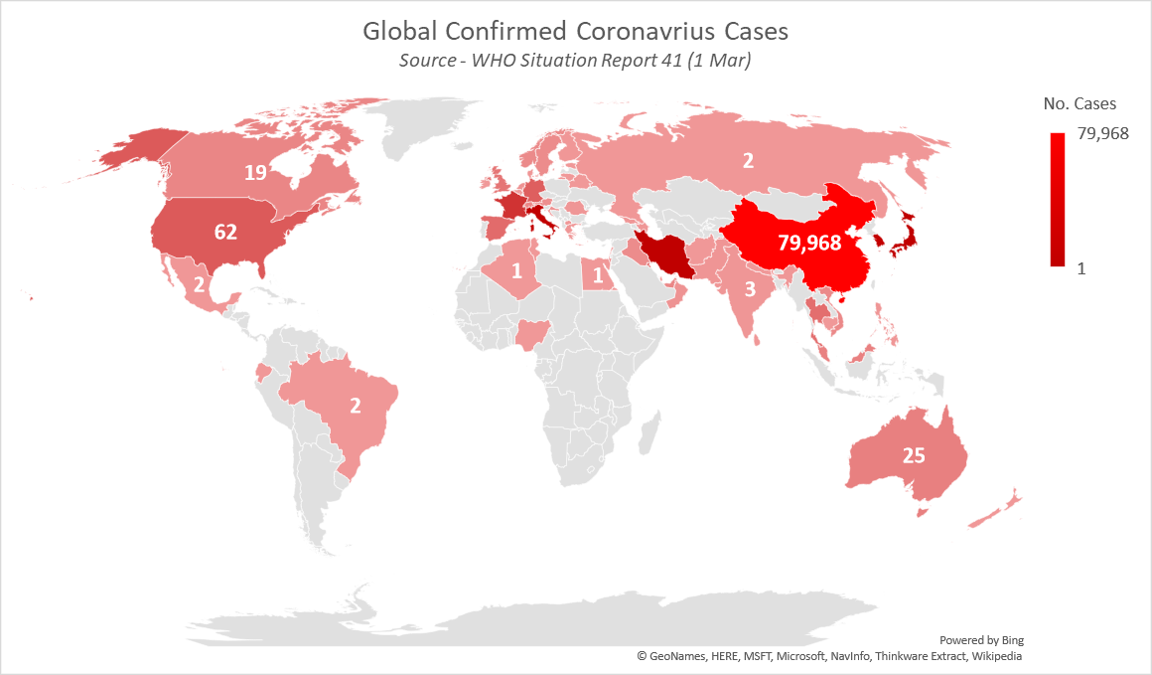 Despite the aggressive pricing for looser policy, and clear indications that global central banks are unlikely to push back on the market's viewpoint, I continue to doubt that looser monetary policy is the best course of action for the global economy, for three reasons:

Taking these points into account, the rationale for rate cuts could be more easily explained as trying to prevent the turmoil on Wall St from spilling over into 'Main St' and making the present situation worse; rather than trying to turn the global economy around single-handedly.

For investors, whatever an individual is thinking about the efficacy of monetary policy, it is important to simply trade what we are presented with.

As the old saying goes, don't fight the Fed.

As mentioned earlier, the euro continued its recent surge on Monday, breaking to a 6-week high well above the $1.11 handle as a result of a continued carry trade unwind, mounting expectations of fiscal stimulus, and likely a short squeeze. Technically, after a break of the 200-day moving average yesterday, the next resistance is likely to come just before the $1.12 mark. 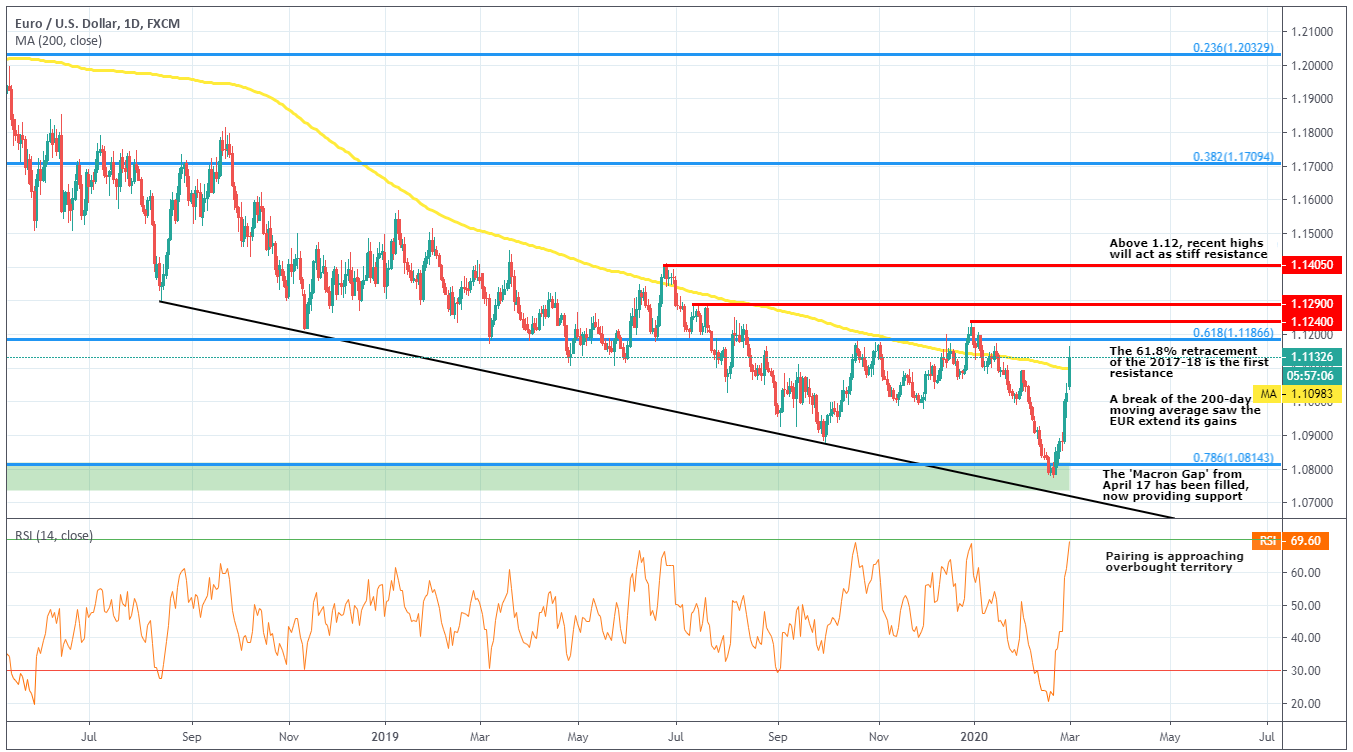