The latest market highlights and our views on the key developments as markets breathe a sigh of relief amid receding Middle East risks; Brexit headlines return; and central bank speakers are in focus today

Markets breathed a sigh of relief on Wednesday amid a marked de-escalation of Middle East tensions in the aftermath of Tuesday evening's Iranian missile attack on US bases in Iraq.

The more positive risk mood began early in the day, after a statement from the Iranian Foreign Minister indicated that the attack was a "proportionate response" and that Iran "doesn't seek escalation". These comments, hinting at an end to military action on the Iranian side, were enough to soothe nerves throughout the morning session.

However, investors remained apprehensive over the US response, and how President Trump would reply to the missile attack.

In a late-afternoon address, Trump struck a very measured, sober tone, and showed little desire for further military action. Despite stating that "Iran will never be allowed a nuclear weapon" as long as he is in office, Trump indicated that Iran were "standing down", while turning to economic sanctions as the US' primary tool for seeking to change Iran's behaviour.

The President confirmed that the US will "immediately" impose additional sanctions, while evaluating their options, and indicating a preference for NATO to play a greater role in the Middle East.

However, for markets, the reduced threat of further military action in the Gulf, significantly boosted risk appetite, as the below cross-asset look shows. 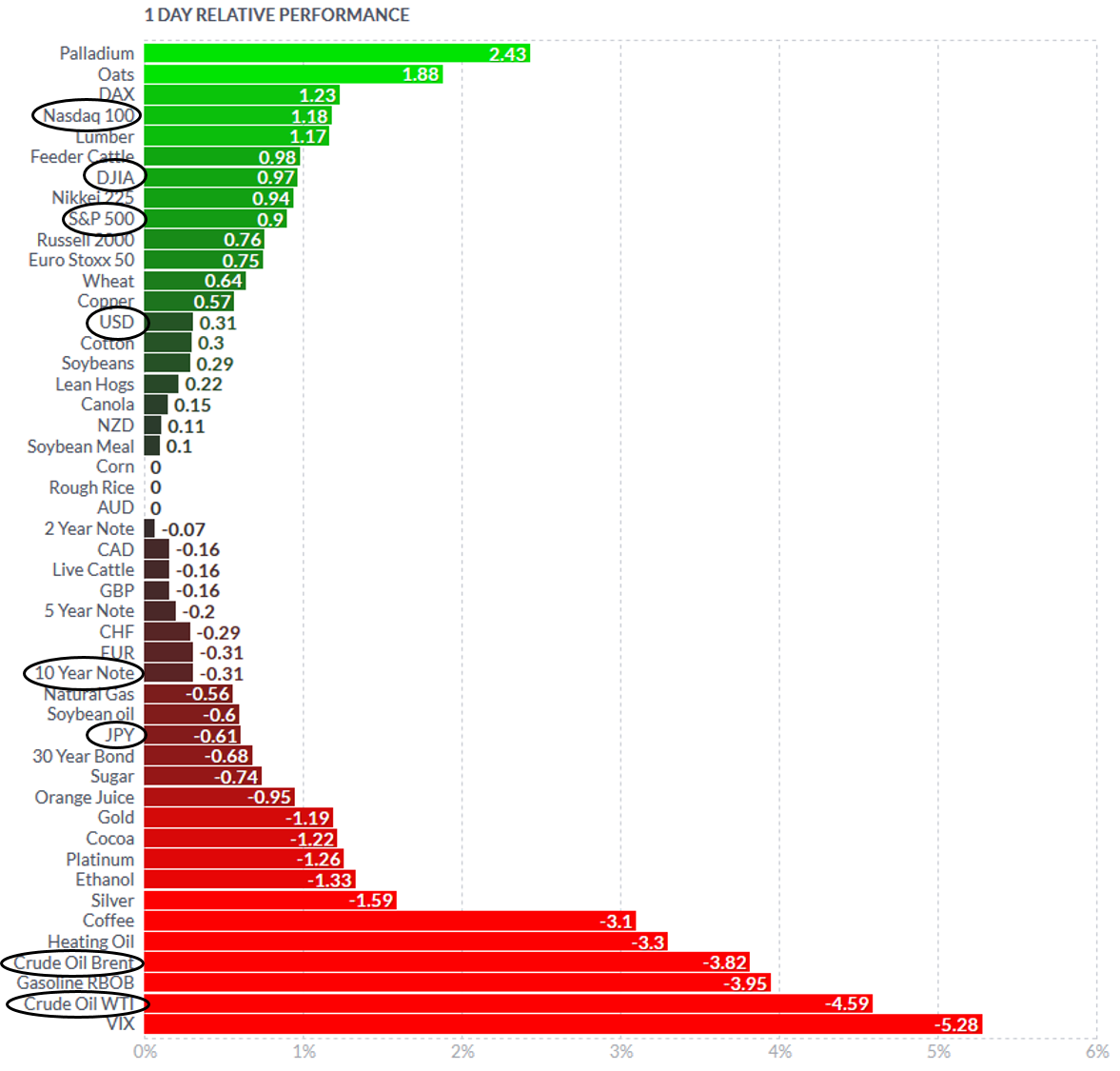 In FX, both the Japanese yen and Swiss franc - typical safe havens - struck a softer tone, while the dollar chalked up back to back daily gains, adding 0.25% against a basket of peers. Also benefitting from the risk-on mood were the Aussie and Kiwi dollars, which added 0.2% apiece.

Elsewhere, oil prices (WTI) settled almost 5% lower as market participants re-assessed the potential for Middle East supply disruption, while gold ended the day more than 1% lower -- pulling back from a 7-year high -- amid reduced haven demand. The reduced haven demand was also in evidence in the Treasury market, where bond yields were around 5bps higher across the curve.

In contrast, US equities gained ground, closing just shy of all-time highs, with the benchmark S&P 500 ending the day 0.49% higher.

Despite Wednesday's optimistic tone, and the de-escalation in tensions, the situation remains very fluid, meaning that sentiment could easily flip the other way in a very short period of time.

Away from the Middle East, Wednesday's data highlight came in the form of December's ADP employment report. The data pointed to the US economy gaining 202,000 jobs last month, the biggest gain since April, and significantly greater than the expected 160,000 gain. 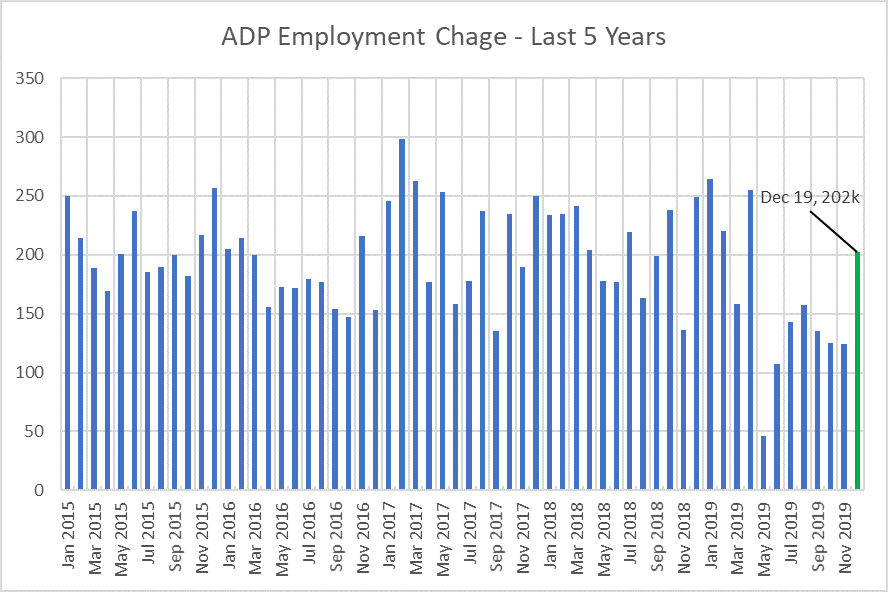 The report also showed a positive upward revision to November's reading - from 67,000 to 124,000 - though this was to be expected after the official labour market report pointed to a gain of 266,000.

Despite the convincing beat on yesterday's ADP number, it is important - as always - to note the somewhat dubious correlation between this and the official nonfarm payrolls figure. Hence, while Wednesday's report may have heightened expectations for jobs day, it should be taken with a healthy pinch of salt.

In the UK, Brexit headlines have returned once again after European Comission President Ursula von der Leyen's visit to London.

Von der Leyen gave an address at the LSE in which she dampened hopes of a full trade agreement being agreed by the end of the year, indicating that the UK and EU will need to prioritise what they want to agree if there is to be no extension to the implementation period.

Later in the afternoon, von der Leyen met with PM Johnson, where both leaders laid out their 'red lines' for the talks. For the EU, that is maintaining the integrity of the single market and ensuring a level playing field post-Brexit. For the UK, the bottom line is to avoid an extension to the transition period, while not agreeing to post-Brexit regulatory alignment.

The talks, however, were conciliatory, with neither side having a desire to rock the boat before official negotiations have even got underway.

The pound, however, largely ignored the latest headlines, instead being driven by flows for the majority of the day - particularly against the dollar. Cable traded in a choppy fashion throughout the London trading session, seeming to encounter significant weakness at various fixings throughout the day, particularly come the London fix at 4pm. Nonetheless, cable ended the day just 0.1% lower; while the pound ground out a gain of 0.2% against the common currency.

Monetary policy is likely to be the order of the day today, with remarks from nine G10 policymakers due, including Bank of England Governor Carney and Bank of Canada Governor Poloz.

Carney's remarks, on the future of inflation targeting, are unlikely to result in significant comments on monetary policy, particularly with the Canadian handing over to new Governor Andrew Bailey in a little over two months' time.

Instead, it is another Canadian - BoC Governor Poloz - who will likely be of more interest, with markets continuing to price in the possibility of the BoC looking to carry out insurance rate cuts in the coming months amid a recent deterioration in economic data. As a result, investors will pay close attention to Poloz's remarks, particularly if any there are any hints towards providing additional policy accommodation in the coming months. Such dovish comments, if they are made, would exert pressure on the loonie.

Meanwhile, south of the border, a host of Federal Reserve speakers are due, including big-hitters Clarida and Williams. The two dovish policymakers, Fed Vice Chair and New York Fed President respectively, are likely to reiterate the FOMC's stance of leaving policy on hold for the foreseeable future, barring a 'material reassessment' of the outlook.

Even those at the extremes of the hawk-dove spectrum appear to be toeing the above line, hence comments from über-dovish voter Kashkari and dovish non-voters Evans and Bullard are unlikely to offer fresh hints on the policy outlook.

Instead, investors will be paying close attention to any comments around the repo market or the ongoing expansion of the Fed's balance sheet. Should FOMC members indicate a preference to continue repo auctions to keep control of funding markets, thus continuing the expansion of the Fed's balance sheet, this would provide further support to risk assets.

However, this ongoing provision of ample liquidity is likely to have the effect of significantly dampening volatility across G10 FX, as was in evidence last year. Furthermore, with markets - particularly equities - seemingly hooked on the 'easy money', it will be difficult for the Fed to reduce their asset purchases when the time comes.

Meanwhile, on the data front, the calendar is lacking any major releases, with second tier reports the order of the day.

From the US, weekly jobless claims are expected at 200,000, significantly below the 4-week average of 237,000. While not typically a major market mover, the claims figure is the final piece of the labour market jigsaw before tomorrow's jobs report. 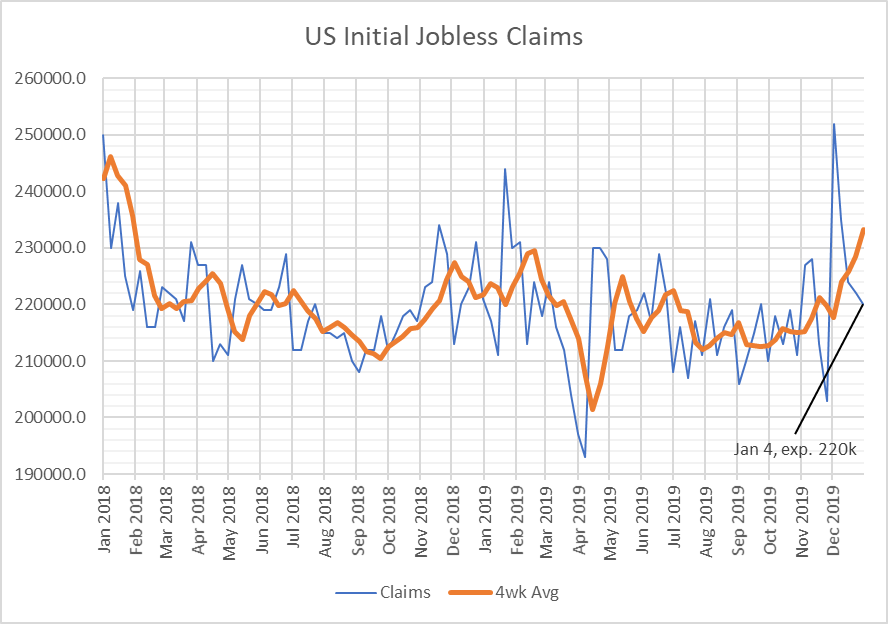 Elsewhere, the health of the labour market will also be eyed in the eurozone. November's unemployment figures are set to show the jobless rate remaining at 7.5%, a post-crisis low. However, as I've mentioned before, the low unemployment has yet to translate into significantly higher wages in the bloc.

Finally, the Withdrawal Agreement Bill - the legislation implementing the Brexit deal in UK law - is set to complete its Commons stages today, paving the way to the UK leaving the EU on 31st January.

With the Tories now holding an 80-seat majority, the Bill is near-certain to pass, at which point it will head to the Lords to complete its passage into law.