The latest market highlights and our views on the key developments as sentiment remains on shaky ground; oil prices surge; US jobless claims spike again; and the latest US labour market report comes into focus today.

The coronavirus pandemic is having a brutal impact on the global economy.

Of course, you didn't need me to tell you that, however economic data is now starting to paint a picture of just how significant a blow the pandemic is landing.

Those who work with me know that it is extremely rare for me to be speechless, but that's exactly what I was when the US initial jobless claims report crossed the wires on Thursday lunchtime.

After a 3.3 million people claimed unemployment benefit for the first time in last week's release, this week's report showed double that -- 6.648 million people -- being laid off in the last 7 days.

The scale of lay-offs, almost 10 million people in the last two weeks, is unprecedented, and makes the financial crisis and other recessions look tiny in comparison. 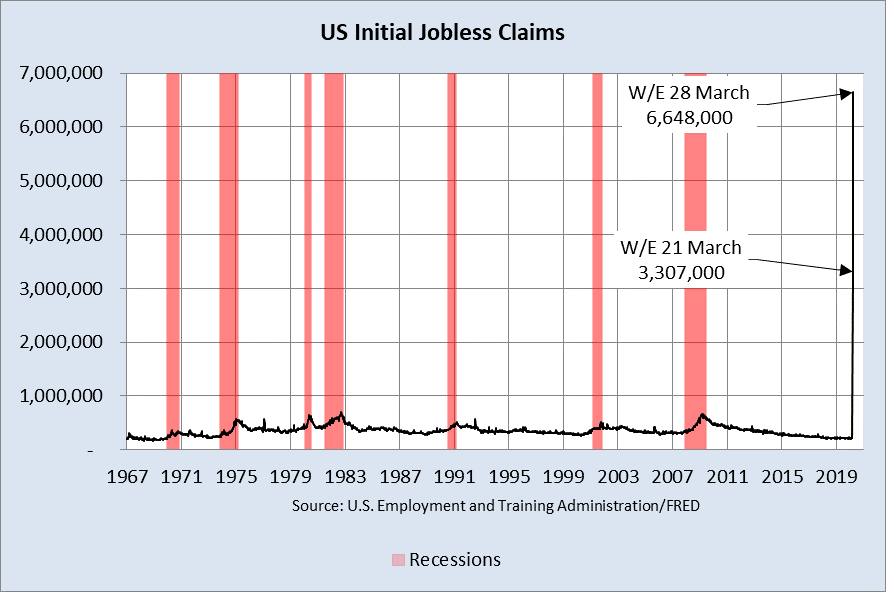 Remember, when looking at that chart, there is a person and a family behind every point on that line.

To put into context the scale of the surge in claims over the last two weeks, it is equivalent to around 6% of the US labour market losing their jobs. Automatically, that will see unemployment surge to almost 10% in April, and that is before we take into account the likely continued increase in claims in the coming weeks.

Put another way, last week, more people claimed unemployment benefit for the first time in the US than the entire population of Scotland.

The report, however -- as noted below -- won't feed into today's nonfarm payrolls or unemployment figures, for which the survey period ended on 13th March.

Nonetheless, the economic sucker punch from the coronavirus is becoming clearer by the day, and will be mirrored in economies across the globe, not just in the US.

As such, and with further negative news and data still coming down the track, it is difficult to argue against the fact that the worst is yet to come.

Oil prices spiked by as much as 40% on Thursday after a tweet from President Trump indicated that significant output cuts may be on the way.

As noted many times previously, crude prices have cratered over the past months as the market grapples with evaporating demand due to the coronavirus pandemic, and oversupply due to the ongoing market share war between Russia and Saudi Arabia.

Trump claimed that he had spoken to both Saudi Arabia and Russia, expressing how he 'expected' and 'hoped' that they'll be cutting production by approximately 10mln barrels. This was swiftly followed up by reports that Saudi Arabia had called for an emergency OPEC+ meeting at which such cuts could be agreed.

Of course, this sent crude through the roof -- amid expectations that supply would be cut drastically -- lifting risk sentiment along with it.

However, there are three important things to note here:

As a result, I wouldn’t be getting my hopes up that deep production cuts are on their way any time soon.

The market thought the same, with crude paring its advance as the day progressed. At the close, Brent - which had gained as much as 40% - settled 17.8% higher; while US WTI crude closed more than 24% higher, its biggest percentage gain on record.


A Wild Ride for Risk Sentiment

More broadly, sentiment was once again volatile on Thursday, as investors continued to monitor the coronavirus pandemic, with confirmed cases of the virus now nearing 1,000,000 worldwide.

After a choppy trading day, European equities managed to end the day just above the flat-line, having recorded solid gains throughout the afternoon session. The pan-continental Stoxx 600 ended the day 0.25% higher, with most bourses nudging into positive territory at the close: 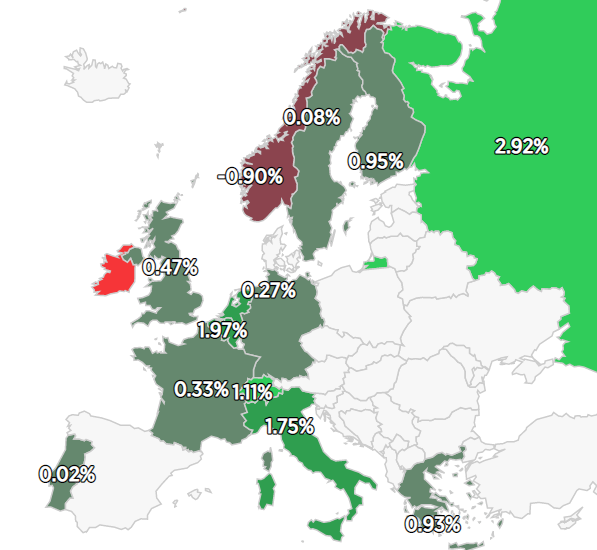 Across the pond, after an incredibly volatile trading session, all three US indices ended the day just shy of session highs. The benchmark S&P 500 ended the day 2.27% higher, with the 30-stock Dow and tech-heavy Nasdaq gaining a similar amount.

The sector breakdown, however, was more of a mixed picture, with healthcare leading the gains and aerospace lagging. 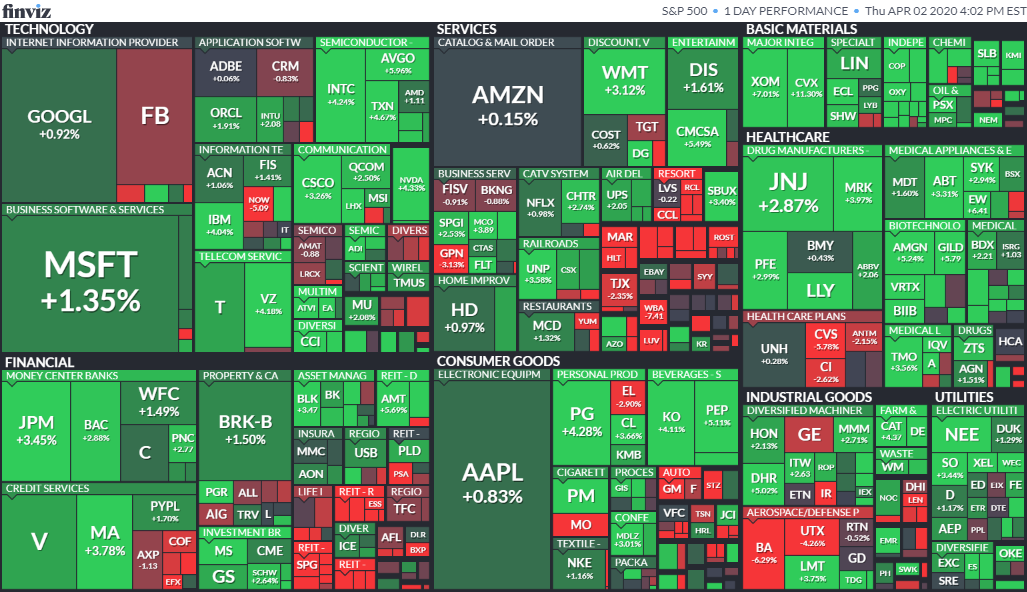 Despite gains for equities, some haven demand was in evidence in the bond market, with 10-year Treasury yields dipping 3bps, trading back below the 0.60% handle and remaining close to a 3-week low.

Turning to G10 FX, it was all about the dollar on Thursday, as the buck remained at the top of the leaderboard for the second day running. 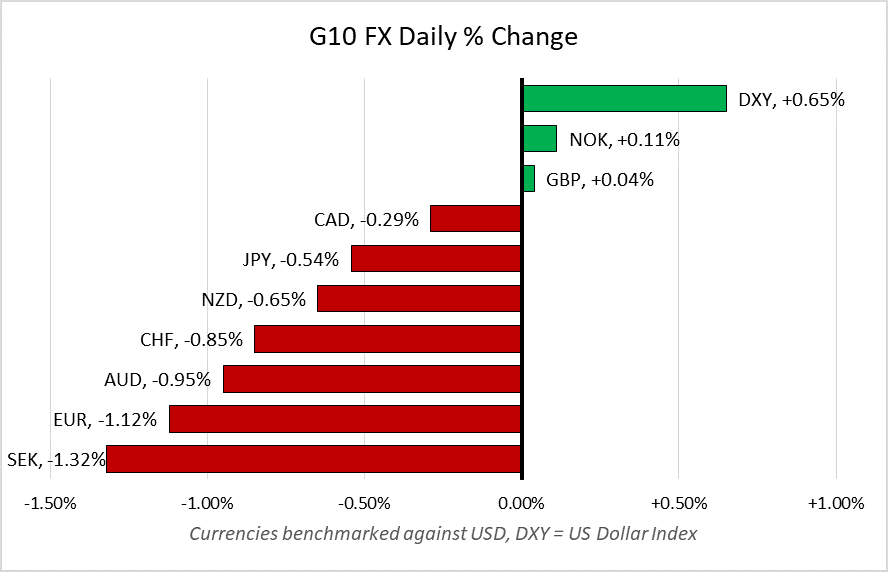 The dollar demand may have stemmed from a number of sources, though was likely as a result of hefty inflows into the US equity market as well as some haven demand.

Sterling, meanwhile, continues to sit rather comfortably around the $1.24 handle, quickly paring early gains after a brief foray up to a 3-week high $1.2475. Against the euro, however, sterling had a more interesting day, adding 0.9% to chalk up a 7th straight daily advance, taking the pairing to a 3-week high.

Finally, the shaky sentiment and risk aversion resulted in stiff headwinds for both antipodeans; while the typical safe-haven Swiss franc failed to find demand, likely with investors remaining concerned that the SNB wait in the wings ready to intervene in the market.

The first Friday of the month means only one thing for financial markets, it's jobs day.

The monthly US labour market report, referencing the employment situation in March, will be released this lunchtime; and is set to paint a grim picture of the US economy. However, bearing in mind that the cutoff period for the survey was 13th March, the full extent of the coronavirus pandemic will only become clear in April's jobs report.

As such, while March's jobs report will be grim, April's will be worse.

Nonetheless, headline nonfarm payrolls are still expected to decline in March, snapping a record-long 113 straight months of gains, with a drop of around 100k expected.

Unemployment, meanwhile, is set to tick up to 3.8% - a 12-month high - though this, once again, won't reflect the full scale of the recent deterioration in labour market conditions shown by the initial jobless claims print mentioned above.

Finally, average hourly earnings are expected to remain relatively firm - at 3.0% YoY - however this healthy pace of earnings growth will likely evaporate in the months ahead as the coronavirus begins to bite.