The latest market highlights and our views on the key developments as coronavirus concerns continue to dominate; global equities record their worst week since the financial crisis as Treasuries continue to rally; and the latest round of PMI surveys come into focus today

A week for the record books concluded with a continued rotation into safe-havens on Friday, as investors continued to seek shelter as concerns about the spread of the coronavirus continued to savage risk appetite.

China have now reported more than 80,000 confirmed cases of the virus, however it is the rapid spread outside of China that is of greater concern to market participants. The notable 'hotspots' at present - as shown on the below map - include South Korea, which has more than 3,000 confirmed cases (an increase of 480% on a week ago); and Italy, which has confirmed 1,100 cases, more than 600% higher than this time last week.

Furthermore, the first fatality from the virus has been reported in the US; while the UK has now confirmed 35 cases of the coronavirus, including the first incidence of 'community transmission' - i.e the infection of someone who hasn't recently travelled to an infected area.

As a result of the rapid spread, the WHO have raised the global risk from the virus to 'very high', further concerning investors about the economic impact that the epidemic will have.

The first signs of the virus' impact on the global economy were in evidence on Saturday, when China released February's PMI surveys. 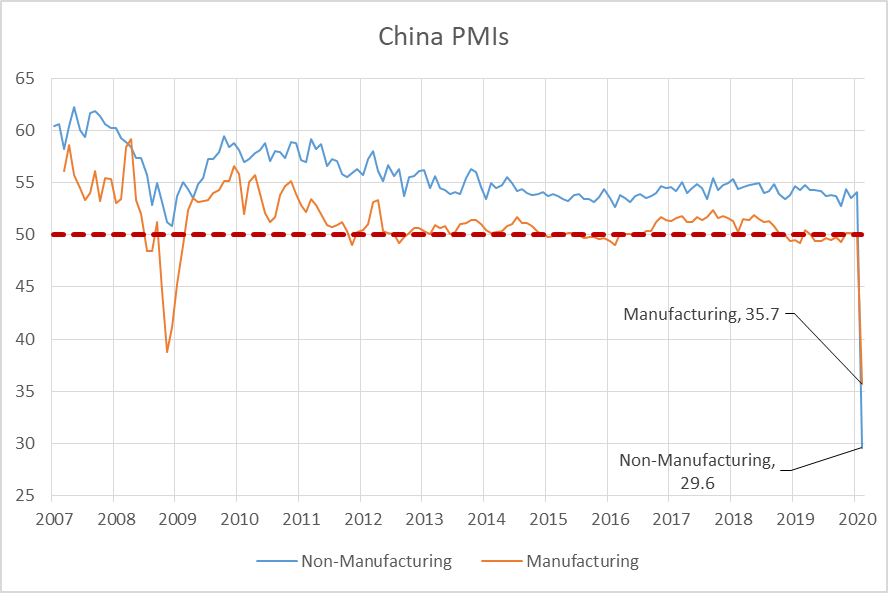 It is not difficult to see how, if such steep falls were recorded in other developed economies, the virus could push the global economy into recession.

Continued, and escalating concerns about the impact of the virus meant market participants continued to seek a haven on Friday.

Starting with equity markets, it was another bloodbath in Europe, where all sectors and bourses ended the day deep into negative territory. The pan-continental Stoxx 600 ended the day nursing losses of 3.8%, down 12.7% on the week. In London, the FTSE 100 fell 3.7%, falling to its lowest levels in 14 months.

Across the pond, things were no better, where US equity markets closed out their worst week since the financial crisis with another day of losses. The benchmark S&P 500 close 0.8% lower on Friday, a loss of more than 11% on the week.

In fact, the S&P's steep fall this week, has taken the index into correction territory in record-quick time, as the below from Deutsche shows: 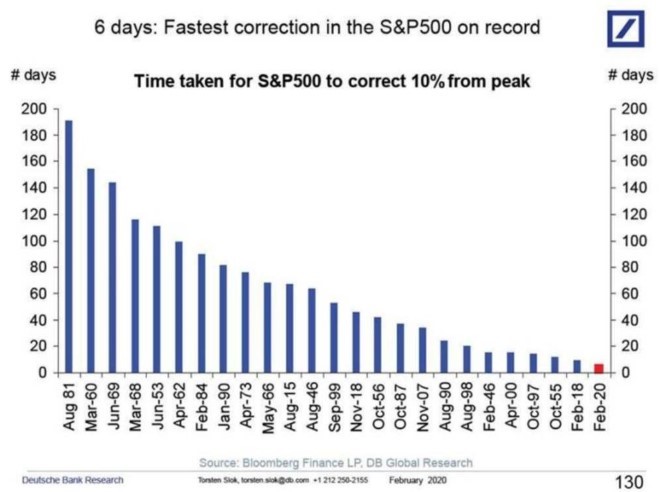 Other US indices also ended lower on the week, with the 30-stock Dow Jones Industrial Average shedding 12%, or a record one-week loss of 3,500 points.

Unsurprisingly, the ongoing sell-off in equity markets has resulted in a surge in volatility. The VIX - also seen as a 'fear gauge' - printed as high as 49.3 on Friday, its highest level since markets bottomed after the financial crisis.

Meanwhile, the continued equity market sell-off resulted in a continuation of the monster bond rally, with nothing beating the safety of Treasuries amid the present market turmoil.

On Friday, 10-year yields settled around 14bps lower, pulling back slightly after hitting another fresh record-low of 1.116%. The decline in yields, which move inversely to price, has seen the 10-year fall more than 30bps this week.

This rally was seen across the curve, with 30-year bonds tumbling to fresh record-lows, and 2-year notes falling 17bps to an all-time low below 1%.

In G10 FX, the classic haven playbook was once again in effect. 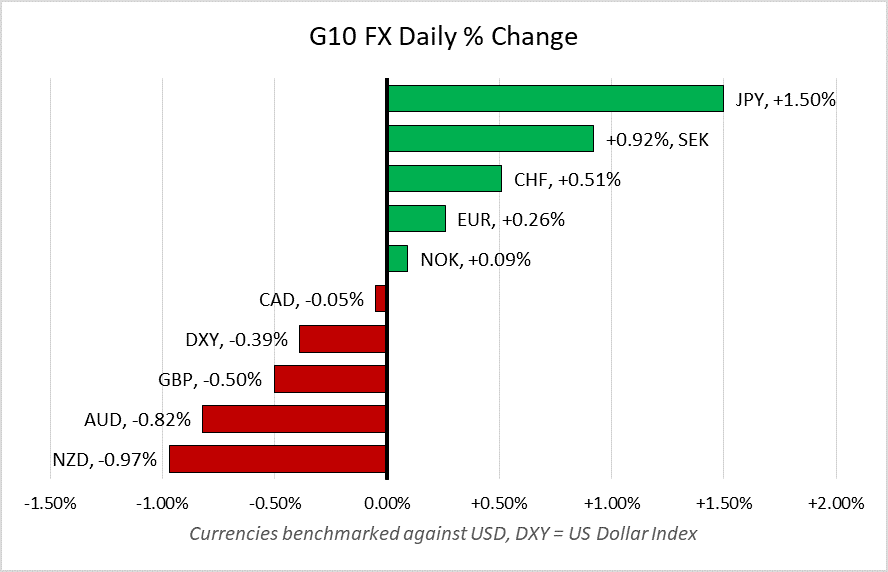 The Japanese yen continued its march higher, gaining more than 1.5%, hitting its strongest levels in around 2 months, and seeing USDJPY fall below the ¥108 handle. The Swissie also picked up a strong bid, gaining more than 0.3% on the day.

Of course, with risk aversion sweeping across asset classes, both antipodeans struggled. The Aussie dollar ended the day 0.8% lower, at fresh 11-year lows, while the Kiwi dollar tumbled by a similar amount; with both being battered into the month-end London fixing.

Meanwhile, the euro ticked higher - continuing to benefit from an unwinding of carry trades; while the dollar stumbled to a 6th straight daily loss as markets continued to price in a policy response from the FOMC (more below).

In commodities, oil prices continued to fall on Friday, pressured by expectations of lower demand as a result of the coronavirus. Global benchmark Brent settled 3.2% lower, while US WTI crude ended the day almost 5% lower, having lost 16% on the week - the biggest-one week loss since 2008.

Rather than this being a sign of gold no longer being a safe-haven, the move would instead appear to represent traders needing to meet margin calls elsewhere, and having to sell whatever they can to meet margin requirements; hence Friday's weakness.

As mentioned above, the ongoing expectations for the virus to have a significant drag on global growth have resulted in ever-louder calls for a policy response from global central banks.

In the US, the Fed Funds Futures market has gone crazy over the last couple of days; from pricing in just one rate cut by year-end at the beginning of the week, markets now price in almost four cuts by year-end, including a 50bps cut in March. 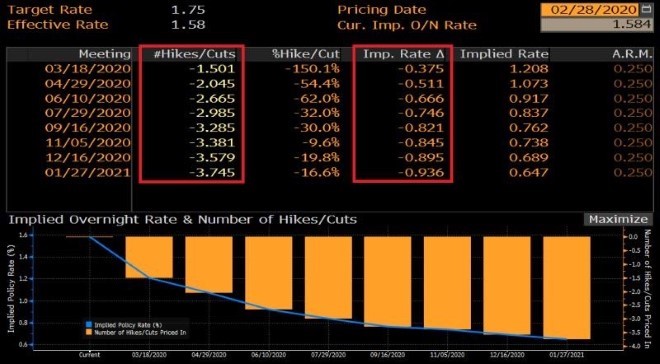 This pricing was boosted on Friday by the re-emergence of the 'Powell Put' - the belief that the Fed will always come to the rescue of financial markets in the event of a downturn.

In a surprise move, Fed Chair Powell issued the following statement on Friday, mirroring the language used last June before the Fed carried out 75bps worth of 'insurance' cuts. 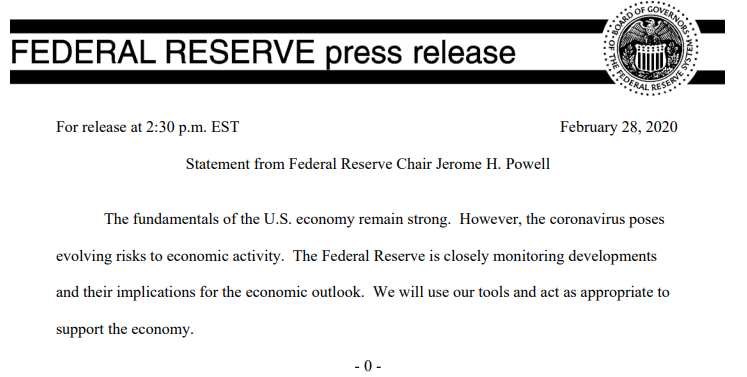 As mentioned before, rate cuts - in my view - are unlikely to be the best way of juicing the eventual economic recovery from the virus, with targeted fiscal stimulus measures likely to be much more effective due to the virus being a supply - rather than demand - shock.

Nonetheless, judging by Powell's statement, it appears that the market may be about to succeed in bullying the Fed into cutting rates again. A March cut, of at least 25bps, would now appear to be a done deal.