The latest market highlights and our views on the key developments as Q2 gets underway with risk sentiment souring helping havens to find a bid; manufacturing PMIs show the brutal impact of the coronavirus on the global economy; and US initial jobless claims highlight today's calendar.

A Soft Start to the Second Quarter

Sentiment soured a tad as Q2 got underway on Wednesday, with markets continuing to take stock of the latest developments in the coronavirus pandemic.

Chiefly, investors mirrored the pessimistic tone struck by President Trump, who noted that the US faces a "painful" two weeks ahead as the nation approaches the peak of the coronavirus pandemic. Market participants were also closely monitoring reports that Germany would be extending its nationwide lockdown, and comments from US intelligence accusing China of concealing the full extent of the coronavirus outbreak.

As for the pandemic itself, global cases continue to rise at an exponential rate, now nearing 900,000. It would not be surprising for the 1 million mark to be breached before the end of the week. Sadly, there are now 44,000 deaths from the virus; more than 30,000 of which are in Europe.

Starting with FX, both the dollar and yen saw healthy demand yesterday, chalking up decent gains, as the scorecard shows: 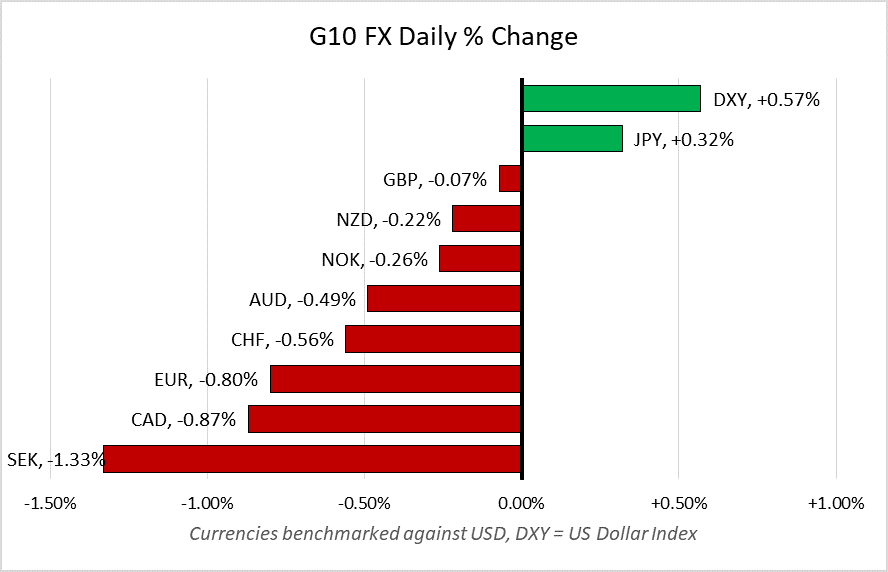 The greenback was the day's standout performer, chalking up its third straight daily gain against a basket of peers as a result of increased haven demand and hefty inflows into Treasuries. Let's hope, however, that the liquidity issues seen towards the middle of last month haven't resurfaced and weren't behind the dollar's rally.

Meanwhile, it was a wild day for antipodean FX, despite both the Aussie and Kiwi dollars nudging lower on the day. For no apparent reason, the Aussie dollar found a significant bid just before the London fixing, surging more than 100 pips in little more than 30 seconds.

For a supposedly liquid, G10 currency that is not a normal move. This also dragged the Kiwi dollar momentarily higher, before both swiftly pared their advance. This could be a fat finger trade, or it could be yet further evidence of continued issues relating to the smooth functioning of the market in these unprecedented times.

Sterling, in comparison, had a relatively quiet day, quickly regaining ground lost overnight to spend most of the day sat 20 pips either side of the $1.24 handle. Against a weaker euro, however, the pound gained significant ground, advancing more than 0.9% on the day, hitting a 3-week high. Sterling has now chalked up 7 straight days of gains against the common currency, its best run since April 2016.

Elsewhere, as mentioned above, the risk aversion sweeping markets on Wednesday, combined with the absence of rebalancing flows, resulted in equity markets taking a dive as the new quarter got underway.

In Europe, the pan-continental Stoxx 600 ended the day 3.2% lower, though most of the selling came at the beginning of the trading day, before the index moved sideways into the close. Unsurprisingly, all major bourses in Europe ended the day in the red: 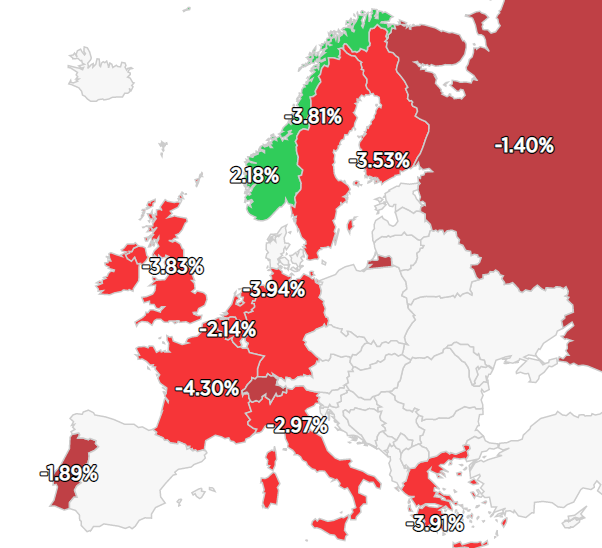 Losses were led by the banking sector, after the five major UK lenders announced -- after heavy persuasion from the PRA -- they were scrapping dividend payments for the remainder of the year. This dragged London's FTSE 100 significantly lower, closing down by more than 4%.

Across the pond, stocks ended the day with heavy losses, showing just how much of the recent rally had been due to rebalancing flows. The benchmark S&P 500 ended the day 4.4% lower, with the 30-stock Dow and tech-heavy Nasdaq losing similar amounts.

With further bad coronavirus news set to come, and volatility remaining elevated (the VIX remaining near 60), my bias for the S&P is that we will see further downward movement to retest the lows seen last month.

The risk aversion also resulted in a steady bid into the long end of the Treasury curve, with benchmark 10-year yields falling 7bps on the day; resulting in the 2s10s spread narrowing to around 40bps, the narrowest in 3 weeks.

Yesterday was also a busy day for economic releases, though the data must be taken with a pinch of salt at this point given the fast-moving nature of the coronavirus pandemic.

Of the data, the latest round of manufacturing PMI surveys was the highlight, though relatively solid -- albeit contractionary -- headline readings mask the full extent of the damage that is being inflicted on the global economy.

In Europe, March's final manufacturing PMI fell to a more than 7-year low 44.5, down from the 49.2 seen in February, and the 14th straight contraction in the sector. 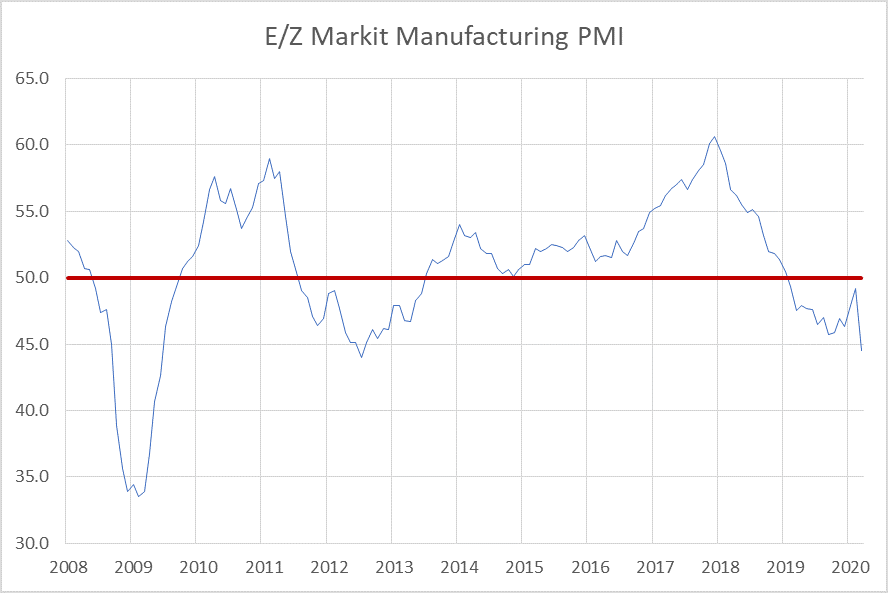 That isn't the full story, however, with elongated supplier delivery times due to the pandemic having the effect of artificially inflating the headline reading. Under the hood, the grim details of the coronavirus became clearer with business optimism falling to a record low, and output in the sector tumbling by the most in a decade.

Here in the UK, it was a similar story, with the headline print of 47.8 masking the complete picture. 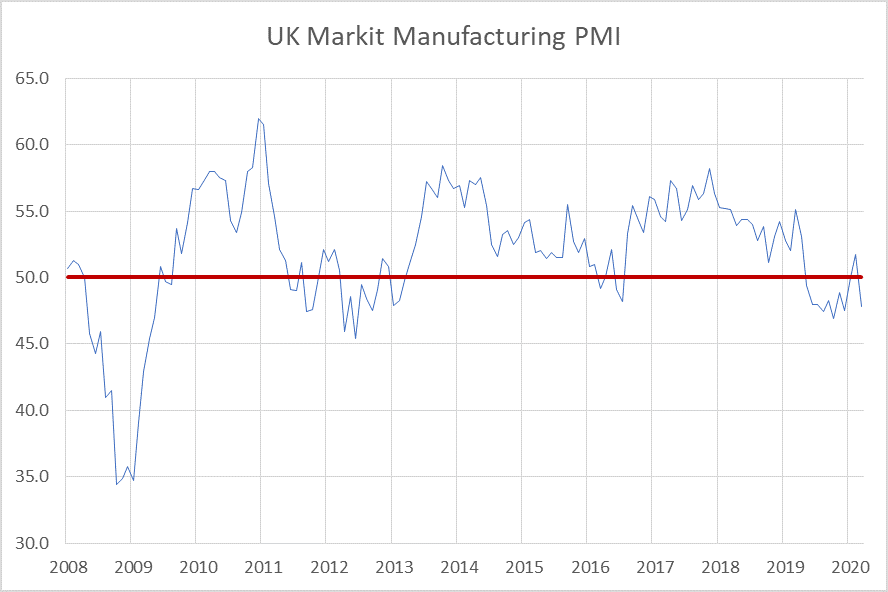 In a similar manner to the eurozone, business optimism in the UK fell to a record low; while output and new orders both fell at the fastest rate in eight years. It is clear that, globally, the worst is yet to come in the manufacturing sector.

It was almost the exact same story in the US, where the ISM manufacturing index fell to 49.1 in March, a 3-month low. 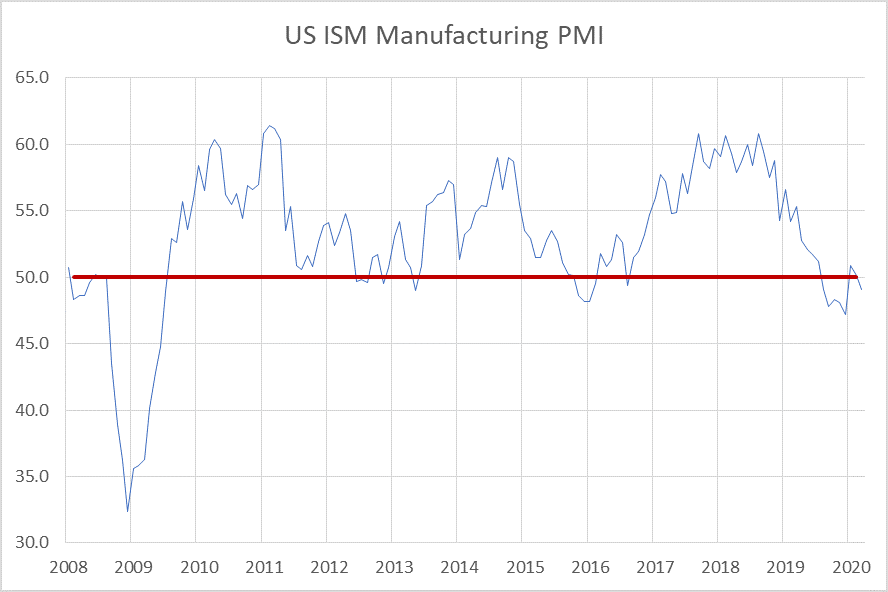 Again, the worst is still to come, as shown by the new orders subcomponent cratering to a more than 10-year low 42.2, while the employment index tumbled to 43.8, also its lowest level in more than a decade.

Finally, yesterday also saw the release of March's ADP employment report, which showed the US economy losing 27,000 jobs last month. However, the survey will have to be largely ignored, as the data collection period concluded on 12th March, meaning that the recent deterioration in labour market conditions has not been fully reflected. A similar caveat is likely to apply to Friday's official payrolls report as well.