In the final Daily Market View of the year, we review this year's major themes and financial market developments. The Daily Market View will now be taking a hiatus over the festive period, with publication resuming as normal from 6th January 2020. On behalf of all at Caxton, I wish you a merry Christmas and a happy New Year.

As another trading year draws to a close, it's time to take a look at the year that has passed, and some of the main themes that have dominated financial markets.

Of course, Sino-US trade tensions have been the primary driver of risk appetite throughout the year, with a ratcheting up of rhetoric, followed by increasing retaliatory tariffs, posing a stiff headwind to growth throughout the year. The trade war has, on the whole, been following the below cycle for the most of 2019, leaving market participants struggling to keep on top of the latest development -- often delivered via the medium of President Trump's Twitter account. The growth headwinds that the global economy has faced have primarily impacted the manufacturing sector, with export volumes depressed and new orders capped by the omnipresent geopolitical uncertainties. As a result, the present ongoing economic expansion -- which, in the US, is now the longest on record -- has been largely as a result of solid levels of consumer spending, boosted by tight labour markets, a healthy pace of earnings growth, and subdued inflation.

However, the consumer cannot do it all on its own, hence global growth has slowed from the pace seen in 2018. This has been particularly evident in the US, where the trade war -- as well as the fading effects of Trump's tax cuts -- have resulted in GDP growth 'catching down' to other DM economies.

As a result of the sluggish growth rate, and continued sub-target inflation, central banks embarked on a policy easing cycle, while the Federal Reserve (Fed) and European Central Bank (ECB) both resumed expansion of their balance sheets. 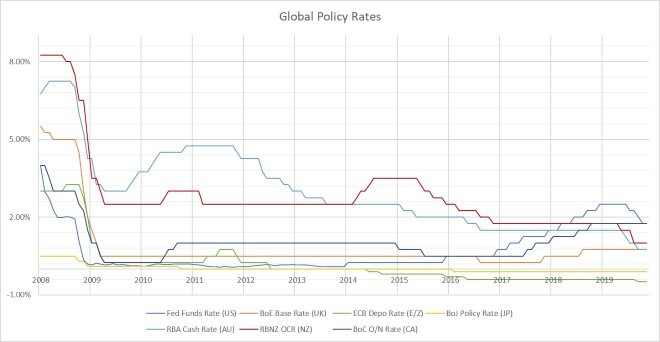 This year saw the Fed announce three 25bps 'insurance' cuts, aimed at prolonging the present economic expansion, while also conducting open market operations for the first time since the financial crisis in order to address plumbing issues in the repo market.

Other G10 central banks also joined the policy easing club, with the ECB taking rates 10bps deeper into negative territory; the RBA bringing rates to a record-low 0.75%; and the RBNZ cutting by 75bps, including a surprise 50bps cut over the summer.

As a result of the dovish policy stance and resumption of balance sheet expansion, liquidity was significantly increased across asset classes. This increase in liquidity and ample supply of 'easy money' sharply reduced volatility in G10 FX, with a number of volatility gauges falling to multi-year lows. For example, JPMorgan's proprietary volatility gauge fell to a 5-year low, while EUR/USD is on track for its quietest yearly trading range since the inception of the common currency.

The lack of volatility wasn't, however, in evidence in sterling pairs; with the pound continuing to trade as a political currency throughout the year.

2019 brought with it four Parliamentary votes on various versions of the Brexit Withdrawal Agreement; three extensions to the Brexit deadline; a Conservative Party leadership election; an unlawful prorogation of Parliament; a renegotiation of the Brexit deal; and the first December general election in almost a century, which resulted in the biggest Tory majority since the days of Thatcher in the '80s.

As the year draws to a close, the pound is on track to end the year with a modest gain, though the recent post-election advance has been pared by concerns over a potential cliff-edge Brexit at the end of next year. For those who have ridden the sterling rollercoaster over the past year, thank you for playing The Forex.

Looking to the rest of G10 FX, this year's performance -- benchmarked against the dollar -- is below: 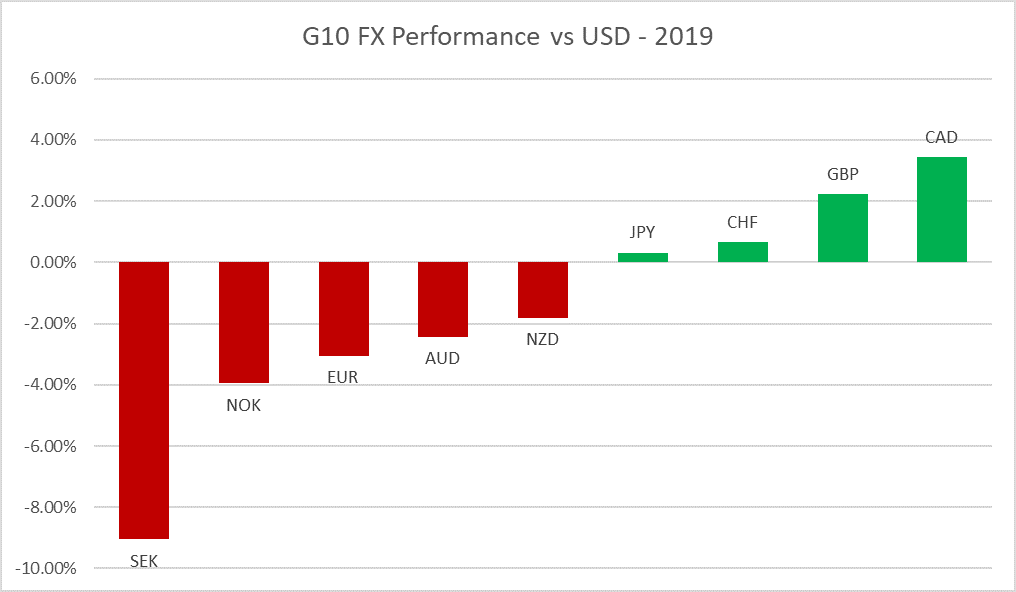 Looking to other asset classes, global equity markets continued their record-setting bull run in 2019, aided by the looser monetary policy stance, with late-year gains fuelled by optimism over a phase one US-China trade deal. In the US, the benchmark S&P 500 is on track for a yearly gain of more than 25%, having chalked up more than 20 all-time highs throughout 2019.

Meanwhile, in the rest of the world, the pan-European Stoxx 600 is also on track to end the year at record highs, having finally taken out the highs seen in 2015. In Asia, the Japanese Nikkei 225 has added more than 20% this year, while Chinese markets are on track for a gain of more than 30%. Of course, Hong Kong, due to ongoing protests, lags behind the pack, with a yearly gain of around 7%.

In fixed income, concerns over the summer about a potential US recession -- sparked by an inversion in the yield curve -- proved relatively short-lived. The 2s10s spread, a useful leading recessionary indicator, is on track to end the year at its widest in more than 12 months. 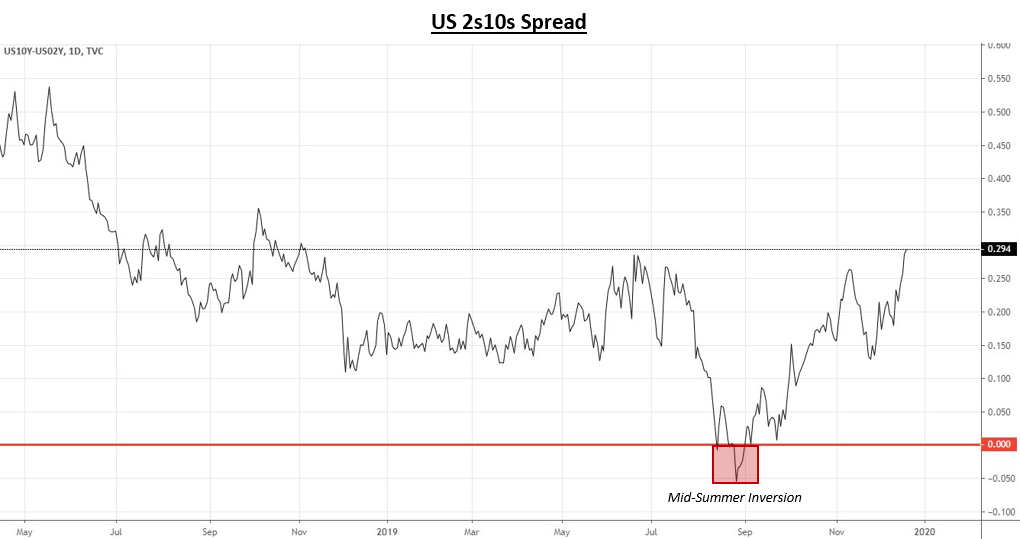 Finally, oil prices have also been underpinned throughout the year, with OPEC-led supply cuts helping to underpin prices. WTI crude is on track to finish the year above the $60bbl mark, while Brent trades near 3-month highs.

And, with that, and this being my final Note of the year, all that's left for me to do is to thank you all for reading my daily Note throughout the year, and for your comments, questions and feedback, which are always gladly received.

Furthermore, I wish you all a very merry Christmas and a happy new year, from all at Caxton. A preview of key themes to watch in 2020 will follow early in the new year.